Hail Caesar Was A Bonding Experience For Clooney And Tatum

For his fourth film with Joel and Ethan Coen, George Clooney wasn't surprised to find himself offered another role as a mentally challenged hero.

"Literally, every time they call me, it's like, 'Well, we got another knucklehead for you to play,'" Clooney laughs. "I'm like, 'Gee thanks!' Then they say, 'Hey, we wrote this with you in mind.' So I read it, and he's an idiot." 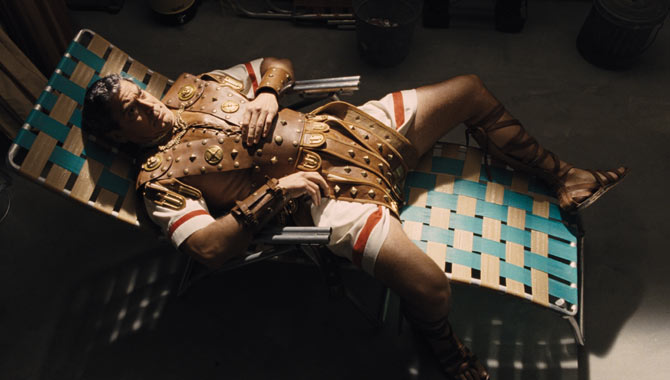 Hail, Caesar! is a breezy comedy set in a Hollywood studio in the 1950s, and Clooney enjoys teasing about his on-set bromance with costar Channing Tatum. "I think you should remember, he fashioned Magic Mike after me," he jokes. "Put a little tequila into me and next thing you know, dollars are flying. I'm putting them everywhere!"

To which Tatum replies that "I would probably cut my arms off" to have George Clooney in the next Magic Mike sequel. But he's afraid to even begin planning Clooney's dance sequence: "I would get so excited. I wouldn't even know where to start."

Clooney says that he's more than up for the challenge. "Oh, I would bust it, man. It would be something to see," he adds, suggesting that his stripper name could be "Big George".

Even though Tatum is an experienced dancer, the moves required in Hail, Caesar! were a challenge. In the film, he plays Burt Gurney, an Gene Kelly-type actor-dancer who's starring in a sailor musical. But he's not sure why the Coens chose him for the role. "Joel and Ethan were like, 'Here's a part, which we hope you want, because no one else can do it,'" he says. "Knowing what it turned into, it's hard to believe that was the truth. I know there are a lot of other people that could have crushed this thing. Because one, I don't sing, and two, I don't tap-dance. So all of that was completely new to me."

Initially, he wasn't too worried because in the script his big number was "like five sentences," he says. "But that became a six-minute song with tap-dancing! And [choreographer Christopher Gattelli] kept telling me, 'I'm not dumbing this down just because you've never tapped. We're going to make this on a level that is legit, and all tappers around the world will be like, okay, that was sincere, that wasn't a joke.' And everybody took care of me to a degree that is not even explainable. So I'm super lucky."