Well it's only January, but it's never too early to plan the holiday playlist, oh no. How many of you think about a sunny get away when you're cooped up in a classroom/office/traffic jam. All of you. It's what we live for all year and we all make sure we have our 'Summer sounds' in order before we depart, right? Generationals' 'Actor-Caster' is going to find itself sitting comfortably in that list. 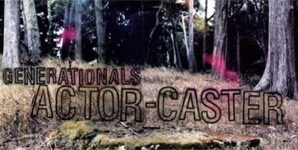 The New-Orleans duo got themselves into this summery rut on their 2009 debut, 'Con Law.' It's not a bad rut to be in at all and it's actually nice to see that they haven't tried breaking out of this rut, it's their niche and the sound they've perfected for themselves and it clearly works. This record isn't a duplicate of their debut; they just seem to have carried on from where they've left off in their soundtrack to the summer romance of two Urban-Outfitters-styled lovebirds. In greeting card fashion, 'Yours-Forever' contains some lovey- dovey words, 'you're in my heart' over the sparkling synths, that sound like they've been nicked off an Owl City mixtape.

'You Say It Too' brings an unexpected but very appropriate influence. The hearty vocal, dainty xylophone and funky, twangy riffs scream four letters. MGMT. Yes, it has some raw psychedelic streak, which is warming and is one of the stand out tracks, along with, 'I Promise.' Another quirky tune that sits under this umbrella (well, in Generationals' eyes it would be a parasol or a cocktail umbrella) is 'Greenleaf.' There needs to be a couple more of these unpredictable offerings on the album though. The romance continues in, 'Dirty Mister Dirty' with the high-pitched, sweet line, 'Maybe then I'll fall in love with you' with some claps as a final touch. Blunt track, 'Black and White' has a lovely little subtle under beat, which neatly unites the guitars and adds another dimension. Speaking of different dimensions, 'You remind me of a distant constellation' is a beauty of a description used in the bouncy intro, of the unusually titled, 'Twenty-Ten-Twenty.' It's got a positive 'vibe' about it, confirming the sunny essence this record withholds.

There's no doubt in the fact that this is a good album. The band have stuck to what they know best and produced some brilliant material. But, these couple of upbeat tracks are potential hits and for their next venture, they should definitely expand on this avenue. A whole album of that jazz and Generationals would have the scary responsibility of a bigger sound, one that could see them become a household name. An exciting prospect.