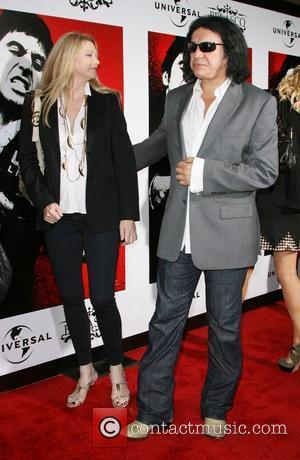 Gene Simmons has invited Playboy founder Hugh Hefner to his recently announced wedding.
The wedding date has been set for October 1st and the 85-year-old Hefner is extremely excited about the wedding as the couple first met at his famous Playboy mansion. The 85-year-old entrepreneur posted the news of his invitation on Twitter, saying "I received a wedding invitation from PMOY Shannon Tweed & rock star Gene Simmons today. They met at the Mansion." Simmons and his fiancé Shannon Tweed, who have two children together announced their wedding this week and will be tying the knot at the Beverley Hills Hotel on Sunset Boulevard in California. The invitations to the ceremony were sent out by their son Nick, 22, and their daughter Sophie, 19. The note inside read "There will no longer be a Team Tweed or a Team Simmons but instead a Team Tweed-Simmons" according to CTV news. Kiss is a heavy metal band formed in New York City in 1973, they are known for their elaborate live performances that include fireworks and rockets as well as flamboyant stage outfits.
Simmons was born in Israel and immigrated to the United States when he was 8-years-old and later joined Kiss as a bassist. The band has achieved both critical and commercial success throughout the years and was voted number 10 in Vh1s 100 Greatest Artists of Hard Rock.