Gene Simmons' Charity Performance In Beverly Hills, California Was Shut Down By Police After Neighbours Complained About The Noise. 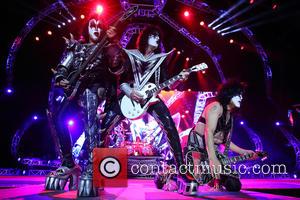 The Kiss star put on a private show at the home of businessman Rohan Oza on Saturday (07Nov15) to raise money for a children's charity, playing for guests including Randy Jackson and actress/TV star Maria Menounos.

However, officers at the Beverly Hills Police Department arrived at the mansion to investigate complaints about the noise, prompting Gene to stop the show, according to New York Post gossip column Page Six.

"The sound from Gene's performance travelled all over Beverly Hills," a source tells the publication. "The cops showed up because of the noise... Gene put down the guitar, but the party continued with a DJ."

The event, which was co-hosted by the veteran rocker, raised money for the Children Matter Foundation, which helps needy kids across the world.