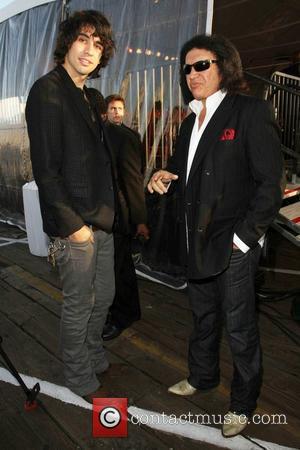 Rocker Gene Simmons' long-term romance with Shannon Tweed is in trouble after the former Playboy model confessed live on U.S. TV their relationship has "pretty much unravelled".
The couple, parents to 22-year-old son Nicholas and 18-year-old daughter Sophie, has lived together since 1985. Simmons and Tweed currently star alongside each other on reality TV show Gene Simmons Family Jewels.
But new footage from the sixth season of the programme, which premieres in the U.S. on Tuesday (14Jun11), shows Tweed confronting Simmons about a photo of the rocker posing outside a Hollywood restaurant with two young blondes on his arm.
In the clip, Simmons is seen trying to explain that he had no idea who the women were, prompting Tweed to snap, "I'm sick of hearing it, I'm sick of seeing it, and I'm sick of looking at it... Gene, please don't play me for a fool."
The scenes were previewed on The Today Show on Monday morning (13Jun11), when Simmons and Tweed were due to promote the show, but the pair appeared to still be feuding, prompting presenter Kathy Lee Gifford to comment, "It's tense in the studio."
Gifford and co-host Hoda Kotb began quizzing Simmons about the photo in question, and after he denied knowing the women, Tweed snidely said, "What he means is he didn't know their names..."
The presenters went on to ask how their relationship was now, prompting Tweed to reply, "It's pretty much unravelled... He's had a fling with many girls."
The awkward interview ended with the couple still at odds as Simmons shifted uncomfortably in his seat.