Gemma Arterton and Kelly Osbourne were among the stars at Mulberry's New York Fashion Week show yesterday (14.09.10), which had a Secret Garden theme and was held at the exclusive Soho House. 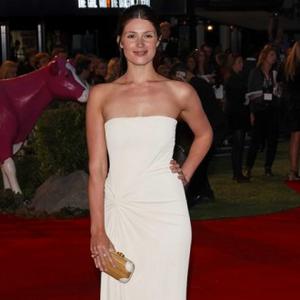 The 'Tamara Drewe' actress and the reality TV star joined the likes of Alexa Chung, Olivia Palermo and Jade Jagger at a Secret Garden-themed party for the exclusive label at the city's Soho House.

To celebrate the new spring/summer 2011 collection guests were treated to Mulberry bellinis and Guinness cupcakes before a live acoustic set by Florence and the Machine.

Trends in the show included belted dresses and colours such as rich purple, pastel Pink and camel.

Creative Director Emma Hill said: "The collection is getting bigger. We have posher fabrics and we wanted to grow older. We've brought in the three-quarter length and it looks richer."

The show was inspired by Frances Hodgson Burnett's 'The Secret Garden' and the 1975 documentary film 'Grey Gardens' about the reclusive Edith Bouvier Beale and her daughter Little Edie.