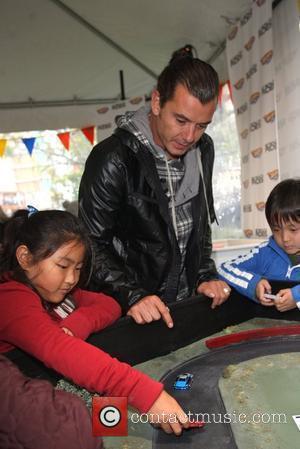 Gender-bending 80s pop star MARILYN has attacked rocker Gavin Rossdale for coming clean about the pair's gay romance after denying it for years in the media.
The Calling Your Name hitmaker first went public with the affair a decade ago after fellow 80s gay icon Boy George hinted Marilyn and Rossdale were an item, but the Bush star has always vehemently denied all romantic links to the singer.
However, in the November (10) issue of Details magazine, Rossdale owns up to the fling, stating, "It’s just one of those things: Move on. When you’re 17, Jesus Christ. I don’t think there’s anything strange about any form of... you’re learning about life. It’s a part of growing up. That’s it. No more, no less."
He insists he denied the affair for years because "it’s always been in the glare of a tabloid world."
But the confession is too little and too late for Marilyn, real name Peter Robinson, who claims he has been made to feel like "a tattletale" for coming out about the romance, and calling Rossdale the love of his life.
He tells In Touch magazine, "I am pleased that Gavin is finally able to be honest about our relationship. I just wish he could have come to terms with this 15 years ago.
"I find it sad that when I spoke out about what we had, I was labelled a tattletale - and now Gavin is using it to promote himself."