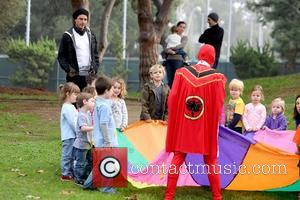 Picture: Gavin Rossdale and Kingston Rossdale enjoy a day at a park together Los Angeles, California - 08.12.12

Rocker Gavin Rossdale and his wife Gwen Stefani sent fans into a frenzy on Saturday (08Dec12) as the No Doubt singer joined her husband onstage at the same Los Angeles event they met at 17 years ago.

Bush frontman Rossdale was performing solo on a rendition of hit song Glycerine on the first night of the 23rd Annual Almost Acoustic Christmas show at the Gibson Amphitheatre, but instead of having his bandmates come back out for the second verse of the track, he invited Stefani to collaborate with him instead.

The married musicians shared a quick kiss after the duet, and an eyewitness tells People.com, "The place went crazy... They haven't done it in at least a decade. They thought it would be fun."

Rossdale and Stefani met at radio station Kroq's big holiday gig in 1995, when both bands were on the bill. No Doubt went on to tour with Bush, and the couple fell in love and married in 2002.