Drones are now one of the most effective weapons the military have when fighting in battle. Their surveillance abilities are incredibly high quality and make it much easier to find and target individuals who are wanted.

Colonel Katherine Powell has been given a mission to go and find and capture an ex-British citizen who's become an extremist and is meeting with some of the men on the most wanted list. Having been previously connected to a series of suicide bombings, the Colonel tracks down the woman (currently going under the new Ayesha Al-Hady) and makes contact with her superiors to let them know her progress.

Using a multitude of surveillance equipment, Powell soon becomes privy to the terrorists next plans, she discovers that the bombers are planning another imminent attack. Placed in an impossible situation, Powell and her bosses must decide how to complete the mission without the loss of civilian life.

At the press conference for 'Ender's Game' at San Diego's Comic-Con, director Gavin Hood discusses the sets built on the movie in reference to the event's Ender's Game Experience exhibition.

Director Gavin Hood, producer Roberto Orci and stars Asa Butterfield, Harrison Ford and Hailee Steinfeld arrive at a Comic-Con press conference for their new science-fiction movie 'Ender's Game' which is based on the novel by Orson Scott Card. Harrison, Asa and Hailee talk about their characters.

Ender Wiggin is the youngest in his family albeit with an astute mind and a powerful logic. It is seventy years since Earth was savagely attacked by the alien race the Formics, more commonly known as the Buggers, and he is exactly what the International Fleet are looking for as they scour their planet for a group of individuals powerful and clever enough to destroy their formidable foes once and for all. He is forced to leave his friends and family and join the Battle School in outer space, but his aptitude throughout all the challenges he is faced with has him upgraded by Colonel Graff to the prestigious Command School under the supervision of war hero Mazer Rackham. He is unaware, however, of just how much hope is being put on him to be Earth's saviour and his ability to make the right difficult decision leaves him with a sense of bitter self-loathing. 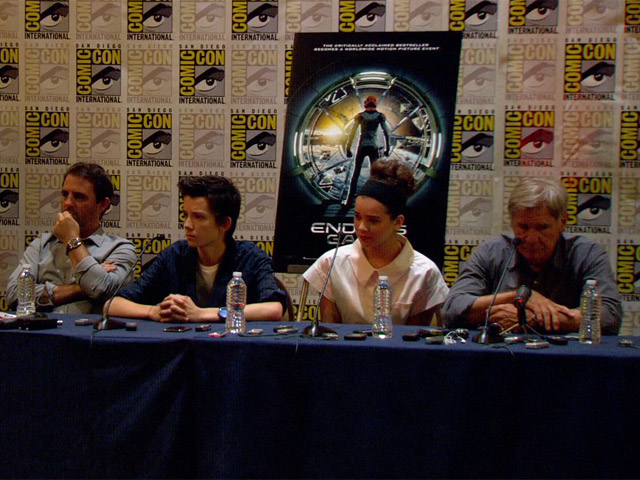