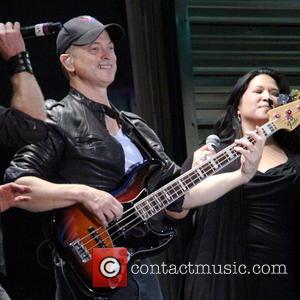 Actor Gary Sinise helped to honour 50 military veterans earlier this month (Feb14) by taking them on an all-expenses paid trip to Disneyland and the Paramount Pictures studio in California - with special appearances from his celebrity pals Tom Hanks, Ted Danson and Tom Arnold.

The Forrest Gump star gathered famous friends, including Danson and Arnold, to help welcome the wounded warriors as part of an event organised through his own charity, the Gary Sinise Foundation, which helps to create and support unique programmes for veterans.

He also organised a special screening of Hanks' iconic 1994 film for the group and surprised them with a visit from the movie's star himself.

Sinise reveals he became involved with the military community after portraying Lieutenant Dan in the film, a job which left a deep impact on him.

He subsequently founded his community organisation in 2011 and has since hosted a number of events for U.S. service members. He also tours with his band, the Lt. Dan Band, to perform shows at military bases all over America.

Sinise tells U.S. breakfast show Good Morning America, "Who would have thought that 20 years later Lieutenant Dan would still play a part in my life? There's something different about this part... The veterans in my family, what had happened to them when they came home from war, I just felt such compassion for them and guilt too.

"There's a hopeful ending to the story of Lieutenant Dan and all our wounded veterans want that story... that they can be standing up again and moving on with life and doing alright. The whole purpose is to send them home smiling. They should know what I'm trying to do here."

Gary Sinise To Be Honoured For Charity Work

Gary Sinise Back With Lt. Dan Band For Charity Show