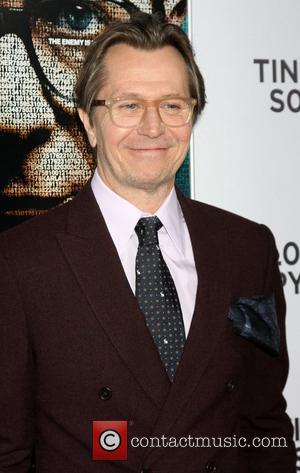 Los Angeles Times critic Kenneth Turan writes in his review of Tinker Tailor Soldier Spy that its director, Tomas Alfredson, "has come up with a film that is endlessly rich in incident, atmosphere and personality, a film that leaves us hanging on by the barest skin of our teeth as we try to figure out who is doing what to whom and why. The spy trade doesn't get much more exciting than this." And reviews don't get much more glowing than those for this movie. "An enormously impressive piece of work," Turan concludes. The film stars Gary Oldman as a spy who returns to MI6, the British Secret Intelligence Service ("the Circus), to hunt down a double agent working in its midst. Claudia Puig in USA Today calls his performance "wonderfully nuanced." Kyle Smith in the New York Post writes "The cast is uniformly excellent, but as the ringleader of the Circus, Oldman owns the proceedings." Smith's conclusion "No film this year left me hungrier for a sequel." The film compresses the 324 minutes of the British miniseries starring Alec Guinness, leaving about 40 percent. But critics suggest that the abridgement serves to heighten the tension. All of the critics have much praise for the screenplay adaptation of John le Carré's spy novel. Manohla Dargis in The New York Times calls it "a pleasurably sly and involving puzzler -- a mystery about mysteries within mysteries." Indeed, critics can find little fault with any of the ingredients of this movie. As Joe Morgenstern writes in the Wall Street Journal "What makes the movie marvelous is ... unerringly subtle yet precise direction plus a literate script with dramatic energy and a delicate tone" and, finally, "an exceptional cast."