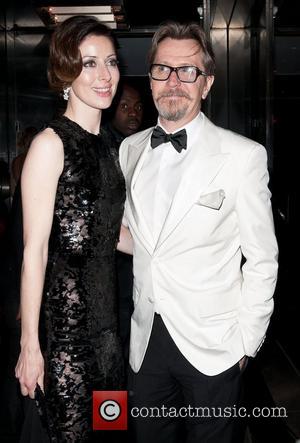 Movie star Gary Oldman has shot a funny TV skit urging U.S. basketball players to stop competing for acting roles.
The Tinker Tailor Soldier Spy star pretends to lose his cool in the comedy spot he shot on a basketball court for U.S. comedian Jimmy Kimmel's late-night show.
Oldman rages, "Just as a professional basketball player spends hours on the court mastering every aspect of his game, I, Gary Oldman, studied acting for many years to perfect my craft, and just as I, Gary Oldman, actor, would never try and join an Nba team just because I'm famous, I, Gary Oldman, would very much appreciate it if professional basketball players would stay the f**k out of movies.
"Who the hell told you you could f**king act? The director on your Powerade (energy drink) commercial? You're not f**king actors. Some of you can't even speak f**king English. You suck."
Oldman ends the spoof public service announcement for the bogus Actors Against Athletes by trying to shoot a basket and missing.
The clip aired during a Jimmy Kimmel Live! special after Tuesday night's (19Jun12) Nba finals clash between the Miami Heat and the Oklahoma City Thunder.