Gary Oldman was forced to forgo his underpants for an appearance on 'Jimmy Kimmel Live' when they got covered in a suspicious-looking chocolate mixture. 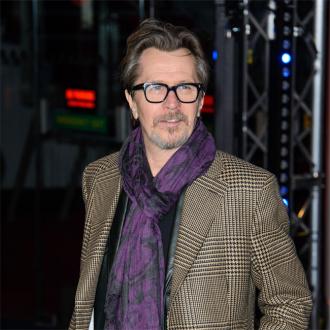 The actor confessed he wasn't wearing any underpants during his appearance on the US chat show on Tuesday night (11.02.14) due to an unfortunate chocolate-related mishap.

The 'Tinker, Tailor, Soldier, Spy' star accidentally got his crotch covered in sticky brown liquid when he was shooting a bizarre Valentine's Day sketch dressed as a dolphin for the show earlier in the day, in which the chocolate fired out of his ''blowhole'' onto his pants.

Gary told Jimmy: ''Right now I'm commando. Some of the volcanic coco is... my underwear is in the dressing room.''

The host joked, ''That's a nice gift for Valentine's Day, 'Honey, I dipped my underpants in chocolate' '', to which Gary replied, ''It looked like something else!''

The strange skit saw the 55-year-old actor dress up as Danny The Dolphin to recreate a mock ''unique British Valentine's Day tradition'', which saw him hand out marshmallows to a group of kids, who sang about how they visit the beach on the most romantic day of the year to hear him ''screech''.

Gary also revealed during his interview that he turned to acting after his ambitions to become a professional soccer star were dashed because of his weakness for the opposite sex.

He admitted: ''I was a football guy. I did play for the county - it was kind of what I was going to do, I was pretty good at it.

''Two things [ruined it]. I grew a couple of inches, I was quite small and fast. [Then] the balance wasn't the same. And girls, I got distracted by girls.''