Gary Oldman opens up about the movie that Russia has banned.

Gary Oldman stars alongside Tom Hardy in the Soviet thriller 'Child 44'; a film that was recently banned by Russia for its depictions of events during the era of Stalin. Oldman plays an army general, who he dubs a 'hero' in the piece. 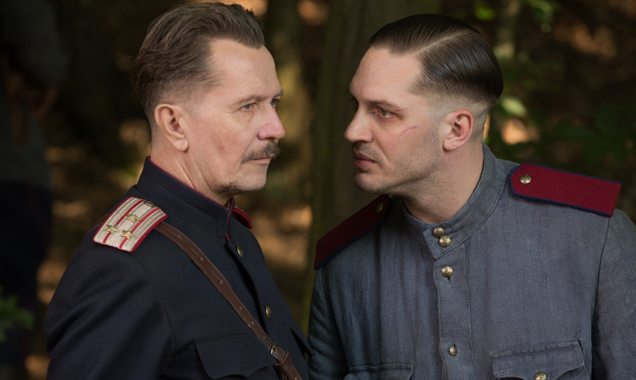 It's no wonder Daniel Espinosa's latest movie has caused a stir overseas. Based on the true story of serial killer Andrei Chikatilo (also known as the Butcher of Rostov), it reveals how the Soviet government refused to acknowledge a series of horrific crimes being so determined maintain the facade of a crime-fee communist state. A disgraced military police officer named Leo Demidov (portrayed by the man of many voices Tom Hardy with another incredible accent) takes it upon himself to investigate, only to be met with denial and threats at every turn. Joining him in his case is Gary Oldman's character, the formidable and initially sceptical General Mikhail Nesterov.

Watch the trailer for 'Child 44' here:

'Nesterov was a, like Leo in many respects, hero', Oldman insists. He also recognises the political impact of the story, and the reason why the movie itself - to use a quote from the film - is 'flirting with treason'. 'I love the idea that there is, in its very classic sense, a thriller - a cop chasing a killer', he explains. 'But in this situation, the bigger killer is the government.'

Oldman has just been announced to direct his own movie, 'Flying Horse'. A romance in which he stars alongside Benedict Cumberbatch, Amanda Seyfried and Ralph Fiennes, and which tells the story of photographer pioneer Eadweard Muybridge and the affair between his wife and Major Harry Larkyns. He will also star in sci-fi spy drama 'Criminal' and post-apocalyptic thriller 'Man Down'.