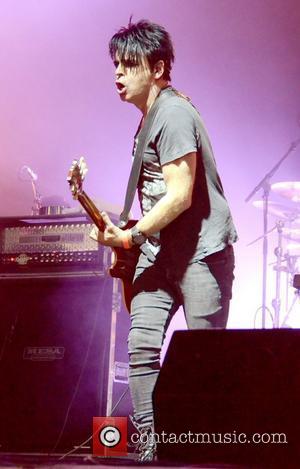 Pop star Gary Numan was left frantic over the weekend (07-08Jul12) after losing his treasured wedding ring - for the second time.
The Cars hitmaker is already on his second band after previously losing the original ring his wife Gemma designed, and he shared his angst with his Twitter.com fans on Sunday (08Jul12) after realising the precious jewellery was missing again.
Numan explained the ring fell off when he was trying his hand at animal husbandry on a farm.
In a post on his page, he writes, "Rubbish weekend... I lost my wedding ring yesterday whilst wrestling a sheep to check for Fly Strike (larvae)."
Numan refused to give up hope of finding his ring and mounted a search - and he found the band on Tuesday (10Jul12) after using a metal detector.
He informed fans, "Found my wedding ring amidst layers of sheep poo. I thought metal detectors were a joke but they actually work. £150 well spent. V (very) happy."
Speaking about his first ring mishap, Numan recently told Britain's Telegraph magazine, "Symbolically my wedding ring is massively important to me. This is a replacement ring because I lost the original one, which Gemma designed, but it is almost identical."