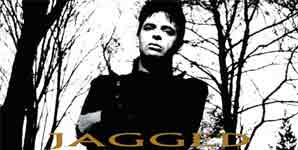 Although Gary Numan may be firmly entrenched in most of the nation's minds as the strange chap who sang about Cars, Numan has over the last few years gained a profile as a current, competent artist. His music still lives in a dark electronic world, but now its one that he shares with the likes of Nine Inch Nails et al. Jagged is a slab of eerie sonic malevolence that draws you into the world of dark nightmares that Numan would have you believe is his home.

This is cleverly structured, intelligent music, with a production quality to match. Gary Numan is making music here that easily rivals the Reznors or Mansons of this world for dark textures and introspective anguish â lets hope the nation can shake off any preconceptions that it still has about Numan and let his work gain the airing it deserves.