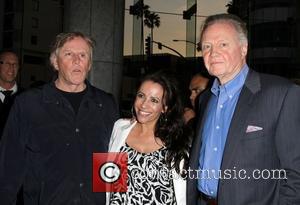 Veteran actor Gary Busey has thrown his full support behind Donald Trump's plans to run for U.S. president in 2012, insisting the property mogul is the right person for the job.
Billionaire Trump is seriously contemplating challenging current leader Barack Obama for the White House next year (12) and he can count on one vote from his Celebrity Apprentice star Busey.
The businessman has yet to officially declare his political intentions, but the Lethal Weapon actor is already spreading the word.
Busey tells WENN, "I'm campaigning for him now. Donald Trump has the wherewithal, the knowledge and the awareness of this country. He wants to turn it back to where the founders had it.
"We have an administration now which I do respect the sitting President but it's a mess. It's a government takeover of middle class America. They keep spending not worrying about the deficit or the budget. Donald Trump will turn that around. I'm campaigning for him now and I will continue to campaign for him."