Gary Barlow Live Dvd To Be Released For Mother's Day 2013

Posted in Press Releases on 15 February 2013 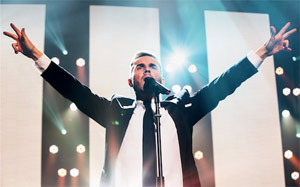 Gary Barlow Live Dvd To Be Released For Mother's Day 2013

Footage taken from his star-studded Manchester show in December 2012 + includes exclusive behind the scenes footage!

This winter, Gary Barlow set out on his first solo tour for over 12 years which saw him play to rapt audiences around the UK, garnering rave reviews along the way. Fans can now relive the best show of the tour on DVD when it's released through Polydor Records on March 4th including exclusive backstage footage and unseen performances.

At his homecoming show in Manchester on December 6th, Gary was joined onstage by some very special guests; these included: fellow Take That star, Mark Owen, JLS, Nicole Scherzinger and James Corden treating his totally unsuspecting fans to a two hour musical spectacular full of one-off duets, Take That smash hits (past and present) and piano medleys of classic solo material for the true fans.

The DVD features additional performances that were never broadcast. For those lucky enough to attend, it was a night they will 'never forget' and now with the release of Gary Barlow Live, everyone can enjoy the concert on DVD from March 4th 2013.

After 20 years in the business, over 50 million records sold, eight No.1 albums, fourteen No.1 singles, seven million concert tickets sold and six Ivor Novello Awards, Gary Barlow is regarded as one of Britain's most successful singer songwriters. Together with Howard Donald, Jason Orange and Mark Owen he is also a member of one of the biggest British bands of all time - Take That.

Gary was recently named in the Queen's birthday honours list and was awarded an OBE for his huge contribution to British music as well as his significant charitable endeavours. In 2012, Gary organised the hugely successful Queen's Diamond Jubilee Concert outside Buckingham Palace, gathering together some of the biggest names from the last 60 years to perform including: Paul McCartney, Elton John, Robbie Williams, Stevie Wonder, Tom Jones, Kylie Minogue, Shirley Bassey, and Grace Jones.  Gary currently sits as head judge on the UK's No 1 show The X Factor for the second year running.