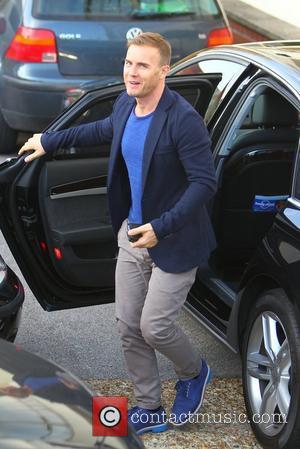 Gary Barlow, Susan Boyle and Westlife were among the pop stars who helped to raise more than $42 million (£26 million) for the U.K.'s annual Children in Need fundraiser on Friday (18Nov11), smashing the charity's previous record.
The six-hour U.K. TV appeal saw a host of British stars including N-Dubz's Tulisa Contostavlos, rapper Chipmunk and boyband JLS urge their fans to show their support and donate to the cause.
Throughout the extravaganza, British girl group The Saturdays took to the stage in dazzling dresses, while former stars of U.K.'s The X Factor, One Direction, opened the show by performing their song What Makes You Beautiful.
Later on in the evening, Take That star Gary Barlow brought his supergroup, the Collective, on to entertain viewers as musicians including Ed Sheeran, Tinchy Stryder, Chipmunk, Ms Dynamite, Contostavlos and Wretch 32 all sang this year's official Children in Need single, Teardrop.
Popular British TV stars appeared in a series of skits and challenges during the live programme to encourage fans to pledge donations.
And the evening's entertainment was a huge success - at the end of the telethon British host Sir Terry Wogan announced a total of $42,131,734 (£26,332,334) had been raised - $12.8 million (£8 million) more than in 2010.
Wogan said, "That is the greatest single total we have ever made in one night, so thank you. Thank you to the British people in these tough times to come up with that kind of money on behalf of Britain's children."
Prior to the televised fundraiser on Thursday (17Nov11), stars including Lady Gaga, Coldplay and Michael Buble wowed the crowd at a special Children In Need concert in Manchester, England, which also helped to boost funds for the cause.
Following the show Gaga said, "It was easy (deciding to play the gig), it's such a wonderful cause. So much of (single) Born This Way is about inspiring youth. I was happy to be here. They wanted me to do it and I said, 'Yes absolutely'."