Garth Brooks' Box Set Debuts At No. 1 As Britney Spears Struggles To Make An Impact On Billboard 200

'Britney Jean' debuted at No. 4 in the chart, while Brooks scored his ninth No. 1

Garth Brooks released his new box set, Blame It All on My Roots, to an eager fan-base last week, who have managed to see it rise from No. 3 in the Billboard 200 to the No. 1 spot this week. Britney Spears saw her new album debut to a rather lacklustre start on the other hand, as it only just managed to crack the top five, debuting at No. 4. 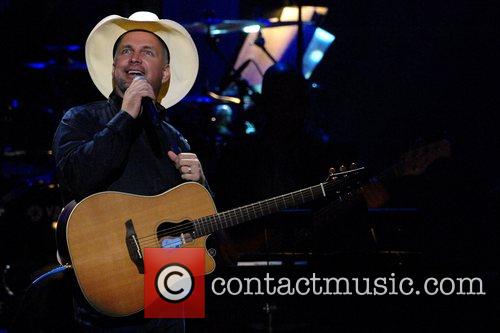 Brooks is back on top with his latest compilation

Brooks' second box set to reach the top of the charts - his first being 1998's The Limited Series - will have undoubtedly been helped by value Walmart were offering the six disc collection for. Initially being sold for $29.98 before a sale price of $24.96 was introduced this week, Blame It All on My Roots will likely be lining plenty of country fan's stockings come Christmas. The box set sold an additional 146,000 copies this week, enough to see it move two places to the top.

Brooks' chart topping move sees last week's No. 1, One Direction's Midnight Memories, fall to the No. 2 spot with sales of 117,000. Meanwhile, Kelly Clarkson has also managed to climb up the charts, with a little help from the festive season, as her Chrstmas album Wrapped in Red jumped from No. 6 to No. 3, selling 112,00 copies this week.

This marks a very disappointing first week of sales for the Princess of Pop, whose new album Britney Jean has massively underwhelmed the Billboard 200 with sales of just 107,000 copies. The album was predicted to score anywhere between 115,000 - 120,000, which would have at least scored it a No. 2 spot, but instead the only new release in the top ten languishes at the bottom end of the top five. What's more, the failures of Britney Jean also makes it Spears' least successful debut on the album chart to date. By comparison, her last album, Femme Fatale, debuted at No. 1 with 276,000 when it was released in 2011.

The top five is completed by Duck Dynasty's The Robertsons' Duck the Halls: A Robertson Family Christmas, the final album in the top ten to shift more than 100,000 copies this week. The festive album is followed by another three yuletide releases, from Pentatonix, Michael Bublé and Mary J. Blige, whilst Eminem and Katy Perry fill in the blanks.The full top ten is available below.

Check out the video for Britney's new single 'Perfume'

1. Garth Brooks - Blame It All on My Roots

Britney will hope that second week sales are kind to her