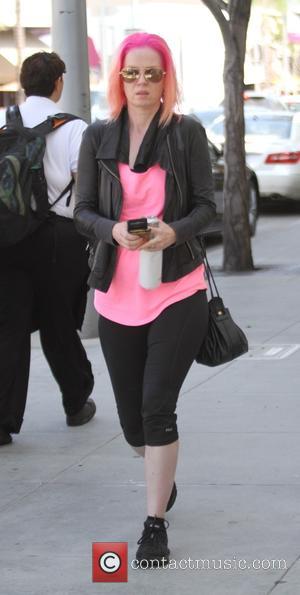 The band started the show at the city's Greek Theatre by performing track Subhuman from behind a white banner, which was pulled down as they began their second song, Supervixen.

However, the curtain stunt went wrong, knocking over a microphone stand and enveloping guitarist Steve, who had to be freed by a stage hand.

The rockers suffered more technical problems during their set, including noisy feedback from frontwoman Shirley Manson's microphone, and computer issues, which prompted the singer to chat to the audience while the backstage teamed attempted to fix the problem.

Shirley apologised to the crowd and compared the error-ridden show to issues experienced by comedy rock group Spinal Tap.

"The best-laid plans... often go awry," she exclaimed. "I can't begin to tell you over the last 20 years how many Spinal Tap moments we've had. You just can't plan for (anything), can you?.. We thought (this show) would be smooth like silk and fluffy like pink feathers!...

"I'm sure there's one a**hole in the audience that will ask me for a refund tomorrow on Twitter but you can go f**k yourself!"

After the show, the rockers thanked fans for their kind words following the technical mishaps.

"Thank you Los Angeles for last night and for all the messages this morning! So happy we made YOU happy," a message posted on the band's website reads.