10. Jack Danz - Ouija Slang
Jack Danz is one third of Defenders of Style, leading exports of the West Yorkshire hip-hop scene (alongside Joe Snow and Prys) who also dropped their excellent The Death Of Meaning album this year. The producer/rapper released his debut solo LP Ouija Slang through Sheffield based independent label Bad Taste Records. The vivid imagery, hard-hitting eclectic production and a vast array of quotable punchlines (e.g. I'm in the club getting lifted like the world cup) make Danz's album one you can constantly revisit and repeatedly enjoy.

9. BlabberMouf - Da BlabberMouf LP
Dutch MC BlabberMouf's 2015 solo album is a breath of fresh air. It's rare that a rapper can sound so authentically nineties. Da BlabberMouf LP sounds as if it was recorded back in '95, and has been lost to the world until now. With a rapid delivery, raw energy and quality production, BlabberMouf spits with a unique charisma that sets him apart from the competition. European hip-hop is often overlooked, but this LP is one of the most impressive releases in a year dominated by quality American and British rap music.

By Tareck Ghoneim in Music Reviews on 15 March 2011

Gangrene comprises of Alchemist and Oh No, two prolific West Coast producers well known in the hip hop game, who have come together to create a genuine underground project very much in the spirit of 90's hip hop. With so much commercial hip hop these days it's a welcome relief to hear that sound again. Al and Oh, more known as producers than rappers, do spit some lyrics throughout the album with some serious guest emcees too. 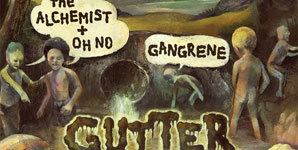