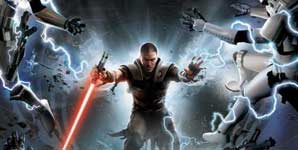 Here's the background. After an opening gambit where you can have a bit of fun bowling around choking Wookies as Darth Vader, you take the role of Darth's secret apprentice - Galen Marek, otherwise known as 'Starkiller'. The opening scene shows how Darth recruits you as a young lad showing an adept appreciation of the force. His apparent plan being to ultimately overthrow the Emperor... you'll see how that turns out. The game bridges Episode III and Episode IV and is designed to capture how the Rebel Alliance was formed.

The first things that grab you about the title are the graphics and the physics engine. The game looks incredibly well and a lot of time has obviously gone into how the game looks. It also attempts to take full use of the 3-D environment in as such as you use your powers of the force to lift enemies and objects and discard, choke or give them some of that 'Dark Side' electricity. For the most part this works well, but there are occasional glitches, be it turning into a wall and seemingly looking through it, accidentally taking a glimpse inside a storm trooper skull or not being able to lock onto a target properly to pluck it out of the sky. This kind of takes the edge off an otherwise great attempt at pulling this off, as flashing structures and incomplete areas of the environment often would.

Your initial orders are to hunt down and kill surviving Jedi Knights following the end of the Clone Wars. Starting off as a rookie apprentice, you accumulate points as you progress through the game in order to upgrade your Force-related abilities and Light Sabre related attacks. There are various environments for you to hack and electrify your way through as well, be it a junk planet, Wookie home world or Tie Fighter assembly plant. Your energy is constantly recharged as long as you are seeing off your foes, as their 'force' energy becomes yours and replenishes your life force.

So what about the in-game action itself? When it plays to its strengths, it will most certainly satisfy the part of you that always wanted to run around the galaxy fighting off enemies with a light sabre. This said, the much heralded new physics engine that claimed to fuse the action with the environment, has cracks just beneath the surface. This could come in the form of your use of the 'force grip', which may allow you to pluck an unlucky storm-trooper from the ground and wave him about helplessly in the air but annoyingly results in you not being able to move yourself whilst other enemies pound you with laser fire. It could illustrate itself in your annoying inability to lock onto targets with 100% effectiveness, be it to lift them up or to target them with a 'force push' or to electrify them out of existence. As you would imagine from this title the sound is also excellent, from the swoosh of a light sabre, to the bark of a Wookie.

Star Wars: The Force Unleashed is kind of a double edged sword. The fact that you often require more accurate precision is at odds with how much fun it is running around with a light sabre, using force related powers to electrocute Jawa's until they are twitching helplessly on the ground. The brilliance of the overall graphics and colours are let down by incomplete areas and flaws in the structure. It is definitely worth a look but may not be remembered with any nostalgia, though nor will you remember it for being awful. If nothing else the title promises multiple endings, one of which is apparently quite shocking & surprising. I'm just off to slash, fling and electrocute my way to find out what it is.