Read our review of SOCOM: Special Forces on Sony PS3

SOCOM, the crack US Navy Seals unit that's been with us since the early days of the Playstation 2, has returned to kick some more third-person behinds in this attempt to rekindle the series' success after a few recent misfires. With updated graphics, new characters and a decent sized single player campaign (as well as the usual bevy of competitive and cooperative online multiplayer modes), SOCOM: Special Forces is a solid tactical shooter that doesn't mind firing off a few clich's every now and then. 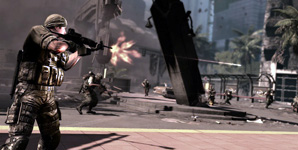 The main story concerns the elite unit battling through South-East Asia in an attempt to stop an evil leader from blowing something important up. Along the way your squad is joined by two Korean Nato soldiers who lend a hand with the fighting as well the one-liners. As you can expect the story is the standard American action thriller plot, told through cut scenes, macho gesturing and containing Hollywood grade evil foreigners. Some characterisation is evident in the two playable characters, namely the Special Ops Commander's murky past and Forty Five's (a Korean female officer) grrrrl power attitude. It is nothing too original, but nice to see all the same. Where the two do differ however is in their approaches to combat with Forty Five opting for a cautious approach providing for the campaigns stealth missions.

As with the other SOCOM games, the tactical element to gameplay is manifested by the ability to order your squad to perform basic battlefield actions. These are primarily used to tell your fire teams to either go somewhere, stand still, or shoot at somebody. Although the commands are simplistic in nature, they do work quite well for setting up rudimentary ambushes and creating kill zones, which is just as well as the enemy AI is shrewd enough to pose quite a challenge at times, quickly punishing gung-ho attitudes, especially in the later levels. The action is pretty full on, with all manner of exploding helicopters, rocket launchers and gritty fire fights, and it is pretty satisfying to efficiently engage and dispatch waves of enemies with good use of fire squads and your own sharpshooting skills. To that end the controls are nice and responsive and there is a decent collection of realistic firearms with which to unleash pain. A nice additional touch is that using a weapon a lot in the single player campaign earns experience with that weapon, unlocking new attachments that can also be carried onto the multiplayer game.

In between these bombastic scenes of destruction come the slower stealth missions. Controlling Forty Five to infiltrate under the cover of nightfall, these levels offer a nice change of pace and are reminiscent of the Splinter Cell games. Slow crawls through bushes and across roofs are punctuated with silent takedowns with a knife and salvos from muffled weapons, leading to some spine-tingling moments. However the ease of failing these sections (one sighting and its game over) mean that they can often lead to re-runs, made all the more frustrating if you just want to get the sneaking over and back to the shooting. When you do make it through however it is doubly satisfying to return the next day with your full squad to blow the place sky high.

Multiplayer brings the option to either play cooperatively or competitively. Coop modes see players taking on specially designed missions against AI bad guys. The option to choose how numerous and ferocious the opposition is allows for a decent challenge whatever your ability, but none so challenging as the competitive multiplayer. It is clear that the success of the Call of Duty franchise in online play has been a huge influence to SOCOM: Special Forces, including as it does the now standard experience points, kill streak awards and combat perks for players to earn as they play. There are 4 modes available, which basically boil down to team deathmatch, capture the flag, domination and bomb defusal, (with the latter involving one player as the bomb defusal expert that the rest of the team has to protect). Just like the Call of Duty games, the challenge level is very high but also very rewarding when you perform well as a result. However with it being quite derivative it's hard to imagine SOCOM: Special Forces being a serious contender to tempt away the legions of COD fans for very long.

Additionally, tying together the solid single and multi player components are some great graphical effects and a stirring musical score. It makes for really decent package all together and although not revolutionary by anyone's standards (it is the 4th in a franchise after all), SOCOM: Special Forces combines enough action and excitement to bypass a lot of the gaming clich's it contains. Derivative it may be, but it's an exciting, robust and worthwhile third-person tactical shooter by anyone's standards.