Read our Review of SOCOM: Fireteam Bravo 3 on Sony PSP

Oh no! Some evil Russian dudes have got a WMD or a Nuke or something and are threatening the world for non-specific reasons. Time to unleash the muscle-bound, clich‚-spouting all American hard-asses of Fireteam Bravo to murder thousands of non-US citizens in the name of world peace. With the exception of all new multiplayer modes, SOCOM: Fireteam Bravo 3's single player campaign combines a lazy Hollywood plot and well worn gameplay mechanics to create an experience which is definitely more about blasting mindlessly than it is stealth and tactics. 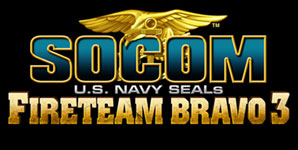 Controlling 'Wraith' the thick-necked leader of the elite SOCOM commando unit, your job is to lead three other equally clich‚d and macho squad mates in a search for Mr. Stereotypical-Movie-Villain and his illegal WMDs. Set across the train yards and bunkers of Eastern Europe the plot is of laughably poor, sub-Andy McNab quality. But then again this is the norm in these tactical squad combat games where weak plots are usually made up for by tense firefights and intelligent combat. Not so for SOCOM: Fireteam Bravo 3 which is decidedly humdrum on both these accounts. Thankfully, due to a nice lock-on system which cycles through targets, aiming and shooting is a simple and fluid exercise. It only takes a few taps to fire a grenade launcher at a group of enemies or to switch to sniper scope to bullseye a distant foe and generally the controls feel tight and intuitive. The firefights themselves however rarely seem very exciting or as tense as earlier SOCOM games. A slightly too gentle difficulty and uninspiring, unintelligent enemies often make the shootouts seem tame, bordering on the mundane. Even with explosions going off left right and centre and dozens of foes closing in on your position the action is never as thrilling as it should be. Where Fireteam Bravo 3 does excel however is in the impressive variety of weapons and gadgets available in the game. Pre-mission, your team can be kitted out with all manner of shotguns, assault rifles, RPGs and the like, each in turn can be further upgraded with under-barrel grenade launchers, laser sights and silencers to suit the task at hand. There is a veritable cornucopia of death dealers at your disposal and experimenting with your team's load out can be pretty interesting, changing as it does, your approach to a level.

In typical tactical shooter fashion the three AI controlled buddies must be issued simple orders and instructions in order to control how aggressively they react to threats and how they storm bad guy packed rooms and progress through a level. Where in other games in the SOCOM series issuing these squad orders allows a player a certain degree of subtlety as to how enemies and obstacles are dispatched, in Fireteam Bravo 3 their effect is often minimal. Short of deciding what type of grenade to throw through a door when it is kicked open there is little tactical advantage to spending too much time issuing commands to your AI teammates as nearly all encounters descend into 'blast-em as quick as you can' firefights. On the whole your squad reacts efficiently and accurately to enemy threats and is adept at gunning down most foes if you sit back and let them. Occasionally one will take too much damage and fall to the ground, ending the game if they are not revived quickly enough (a courtesy which is not extended to the player). But generally unless things are going really badly, another teammate will revive the fallen soldier before you need to do anything about it.

The real selling point of SOCOM: Fireteam Bravo 3 is the multiplayer which can support up to 16 players competitively over Playstation Network. Thankfully online games really do make up for the mediocrity of the single player experience and are generally quick paced and exciting. The smooth aiming controls really make sense when battling human opponents and a lack of lag mean that overall multiplayer battles are free from annoying distractions typical of PSP online play. The variety of weapons to choose from can also lead to some creative combat tactics which is a nice change from simply running and gunning. Although the co-operative modes do breathe more life into the single player campaign they generally suffer from the same faults as well. Enemy AI just isn't as satisfying to dispatch as other players.

SOCOM: Fireteam Bravo 3 is a solidly presented tactical shooter. Lacking somewhat in the imagination department and suffering from a short and underwhelming single player, it still manages to deliver a refined gaming experience coupled with a decent and often genuinely engaging multiplayer component. It does exactly what it says on the tin, just not as brilliantly as I would have hoped.