Since it arrived on the PlayStation 2 in 2004, the Singstar franchise has been the undisputable daddy of the karaoke game, impressively racking up over 80 different versions so far. Spawning countless imitators and pretenders to the crown, Singstar has managed to hold onto the top spot thanks to its great selection of tunes, ease of use and friendly interface. No wonder that it has found its way into living rooms around the country as the party game par excellence. In these latest releases Sony is, for the first time in the series' history, bringing fresh new gameplay elements to the table in the form of plastic instruments in Singstar + Guitar and dancing, thanks to the new PlayStation Move, in Singstar + Dance. 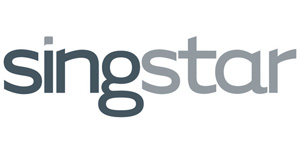 First things first, it is worth pointing out that both playing guitar and dancing are entirely optional and, should you so desire, both games can be played straight, exactly like previous Singstar titles. For those unfamiliar with the brand, players can either compete or play cooperatively for points by singing along to songs, being rewarded for notes sung correctly. In true karaoke style, lyrics scroll up the screen with a music video back drop. It really is simple but brilliant stuff and I've lost count of the number of great drunken nights I've had with friends blaring out 'Girls Just Wanna Have Fun' or 'Disco 2000'. The core of this gameplay remains unchanged with each title offering a reasonable 30 songs to sing, ranging from contemporary pop (pa-pa-pa-poker face) to all time greats (baby love, my baby love) with additional titles available for download. I really can't fault the singing, it is great fun, my only reservation is that 30 songs seems slightly too few.

With that said, how does the introduction of dancing work in the mix? Well Singstar + Dance allows up to four people to play simultaneously with two singing and two dancing. Dancers take a hold of the PlayStation Move controller in their right hand and try to match the moves as shown on the screen. Once again, this is fantastic fun. There are few things as funny as watching your friends dance along like idiots as you belt out all the wrong notes. Recognition of the moves is good and each routine is tailored to match the style of the song that you are playing. On the downside, the actual routines themselves are pretty difficult to follow, especially if there are many of you playing at once and your little dancing guy is relegated to the side of the screen. Moves are varied and exciting but also exhausting if done correctly and it's very easy to get confused and lose your place. Maybe that's just me and my friends, and other people may well be far better, but either way it is still a lot of fun to get up there and strut your stuff despite (or maybe because of) the fact you'll make many blunders.

Singstar + Guitar is pretty much the same idea but with a plastic axe and a selection of 30 songs composed mainly of indie and classic rock anthems. Much like other guitar-sims, wannabe guitarists are tasked with strumming the correct multi coloured notes as they fall down a digital fretboard and again two people can play simultaneously with two singing and two strumming. Unfortunately for Singstar + Guitar, the unavoidable comparison with the Guitar Hero experience leaves it a lot worse off. As to be expected really, playing the guitar is simply not as fun or as well implemented. With no star power available or crowd feedback it is a rather superfluous affair made more frustrating by the often unreadable fretboard squeezed into the side of the screen. Those pining after a decent guitar experience will be better off looking elsewhere, though the core singing component is still as compelling as ever.

A nice inclusion in both games is the ability to video record your performances and share them over the PlayStation Network. Your embarrassing videos can be souped up with all manner of tricks and special effects and unleashed onto the unsuspecting world. Naturally this option seems a bit more relevant to Singstar + Dance where people can show off their tight dance moves, or lack of, than to Singstar + Guitar, but it is a good feature nevertheless. Ultimately both games are blessed with the great core gameplay of the Singstar series but in terms of the new content, Singstar + Dance is the winner for me as it offers a great and accessible new way to enjoy the game. Although Singstar + Guitar is good, the guitar element just doesn't cut it compared to other titles and I was a little disappointed as a result. However its rockier track-list does make it a great Singstar title in its own right, just leave the guitar at home.