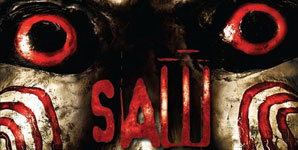 The Saw franchise can be defined in many terms, but perhaps the most enduring when the series eventually disintegrates into spin-offs and loses its focus is its success. Figures are throwaway at the best of times, but it stands to reason that the Saw is perhaps the most successful and persistent horror series of the modern era and maybe of all time. The gore, philosophy and a surprisingly interesting plot amalgamate into a nigh-perfect 90 minute film. The ideas by now are becoming a trifle stale and if any other film studio I can think of were at the helm, the sequels would resemble failure. It's in the execution that the films continue their success: playing off a strikingly original concept and imbuing it with enough fresh-feeling diversity to remain successful. It's this juxtaposition that the studio behind the canonical videogame project have missed.

The plot here revolves around the obsessive Detective Tapp - who was shot in the first film after his throat was slit and his partner was killed. It wasn't a particularly good time for our protagonist, but these events provide the backdrop to the game, as Tapp becomes slowly more single minded and fervent in his attempts to track Jigsaw down, leading to the loss of his badge, friends, social skills, etc. Tapp's obsession becomes the flaw Jigsaw wishes to eradicate, and to that end, Tapp is placed in an abandoned asylum and has to follow a series of clues and partake in a number of games in order to be freed- in order to restore his life and remove this obsession of his.

For anyone who has seen the Saw films; and I'm guessing a lot of you, as this is a review for a Saw videogame, the main principle behind the games and tasks Jigsaw forces his victims (or students, if you like) to play is sacrifice. That's quite hard to do in a videogame- there's an autosave in Saw so you never really lose anything if you die except maybe one or two minutes -not what Jigsaw would call a valid sacrifice. Instead, the special games Jigsaw sets up with a Billy doll and micro-cassettes feature you attempting to save someone you've known for 5 or so minutes in the game via an increasingly difficult set of minigames. These minigames vary from the Wheel of Tedium (Konami- if you want to use this name for the next game, contact my people) where you spin a bunch of pipes until they all connect up and you can do it all again twice more, the ever fun cog game, where you go from one spinning cog to another with some other different sized cogs and some other really dull stuff that kills the mood completely- you would forget to be scared completely, if it wasn't for the fast and tense combat you find yourself in with other people playing games.

Just kidding! The combat is terrible. The only reason it's frightening at all is because you're never quite sure when the game last saved itself. Combat boils down to a simple tree- if you have a big bat with nails in, press square twice and the enemy dies. If you have the arm of a mannequin or something rubbish along those lines, you run out of the room and bolt the door behind you. Of course, in the time it takes you to awkwardly turn round and face the door after you've run through it, get to the magic hit box area whereby you can both shut and lock the door, you either end up with the enemy in a locked room with you or, and this is pretty funny to watch, you shut the door, only for it to be immediately opened before you've had a chance to lock it- this can repeat until either you or Mr. Terrible McKnifey AI Man wins this honourable contest. Usually, you end up getting stabbed in the face, reducing your health to virtually nothing- healing with a hypodermic syringe for some reason has a massively long animation before you start to see any healing effects, so if you do get hit more than twice, you'll probably die. The reason there are people trying to kill you is because Jigsaw, the cheeky bugger, has sewn a key into your belly where the bullet was previously, and told a bunch of guys they can get out if they get to the key. Arbitrary.

And when you don't have the combat to deal with, it's a series of pointless traps like glass on the floor when you don't have any shoes (and in spite of the death count and sheer number of shoes entailed in that, you never get any shoes, ever), flames coming from random places, instadeath steam, wall, shotgun, tripwire and gas traps. This game is pretty stupid, and not very scary at all.

For an Unreal Engine 3 game - the same engine powering Gears of War 2 - it doesn't look great. It runs okay, better than say, The Last Remnant, but still results in epic pain now and again because the game has had a lot of changes late on in its development cycle. It's said that Konami want to replace their amazing, wonderful and terrific Silent Hill series with this uninspiring, mediocre and utterly featureless drivel and go long term, and that would be a terrible idea unless the dev team start thinking up some ways to make the concept work: because it's a bloody great concept for a game. Interactive fiction and point-and-click can make this sort of idea work brilliantly, but you have to make the characters and the setting memorable, otherwise the player won't care, they just won't give a damn.

Stop here if you don't want to know about the game's ending- know that it's an average game that you shouldn't buy, even if you're the biggest ever fan of the films and it gets a smack bang in the middle 5/10. Of course, now that you aren't going to buy it, you may as well carry on reading...

I want to talk about the game ending, it's the difference between the game being good, like Lost: Via Domus was in spite of its flaws, and being dull, like this is. Here's the deal. You get to the end of the game and Jigsaw asks if you've learned your lesson- you've saved everyone there is to save and there's a choice of two doors: Truth, or Freedom. If you go to Truth, clearly, the bad ending happens, no lesson has been learned, the wife of your dead partner has had her mouth sewn up and been pretending to be Jigsaw while you chase her about. The 'Truth' is revealed to you on a micro cassette as Michelle, the woman, runs through a door to try and get away from you and gets shot in the face as she crosses a tripwire. Cut to you in a proper asylum this time, losing it thinking you're still playing Jigsaw's games. Great. So I reloaded the game to get the good ending, through the door marked Freedom. I go straight through, expecting a taciturn thanks from Jigsaw and lots of happy people all being really happy and successful now that I'd let them all go. It would have been lovely. We could have all picnicked together. No. Instead, I get a trophy called 'Never Truly Free' and a 30 second cut-scene of Tapp in his apartment looking over his big wall filled with Jigsaw crap and some newspaper clippings about how well he did and how we was a big hero. He starts crying, then shoots himself. No. This is another bad ending. Why would you design a game with one brilliant choice in it, right at the end, and then punish the player for playing by the rules? If the player is actually able to sacrifice going after the 'Truth', they should be rewarded! This is one of the only ways that the person on the other side of the TV can sacrifice something for the good of their character, and the developers decide they can't even give us that.

This is why the game gets a 5/10 instead of a 7- it would be tolerable and even enjoyable in places if the ending re-quantified the whole.