Read our review of Saw 2: Flesh and Blood on Mocrosoft's Xbox 360

Anybody who has seen one of the numerous Saw films will know what to expect from a Saw computer game. The relentlessly popular franchise has carved its own niche in the horror film market with its gruesome depictions of torture of the cheap, nasty and sickeningly inventive kind. In the films as in the games, various innocents are strung up in horrific torture traps and are forced to play murderous games, invented by Jigsaw, a circus mask wearing serial killer. In Saw 2: Flesh and Blood you play as Michael Tapp, the son of Detective David Tapp (Danny Glover from the films), and you are charged with rescuing a number of Jigsaw's victims from various buildings, each full to the brim with diabolical death traps. 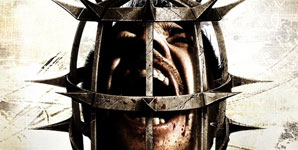 The first Saw game, like many 'game-of-the-movie' cash-ins, suffered greatly from repetition, awful graphics, shoddy controls and terrible fight sequences. It gives me no great pleasure to report that many of these faults have carried on to Saw 2: Flesh and Blood, although with some improvements. The main mechanic of the game involves exploring creepy converted locations, crawling through barbed-wire filled tunnels and across broken glass in order to solve puzzles that'll release Jigsaw's captive plaything. At first the frightening atmosphere of the environments is vividly realised and palpably oppressive, as you uncertainly venture around corners and through lock doors, solving the various puzzles and traps that leap out at you, there is a great sense of tension and despite slightly awkward controls.

The puzzles take a variety of forms, from the obligatory lock pick challenges and pipe-mania-esque tile problems to simple quick time events that pop up on the screen, better examples of which can be seen in many other titles. Annoyingly in Saw 2, it really doesn't take long until you start seeing the same puzzles repeated, and then repeated again. Once you've played through for about an hour or so you will have seen pretty much every puzzle, bar a few twists, that the game will ever throw at you. Naturally this leads to boredom, frustration and a complete lack of any sense of fear, not good for a horror game.

Occasionally as you trundle through the game you'll come across a living opponent instead of a trap door or trip wire. Terrible combat was one of the worst elements of the first game so thankfully the fighting segments have been drastically updated this time around. Gone are the slow and sloppy slugfests of the first game instead all fighting is done now via quick time buttons popping up on the screen. The result of this is that the fights are more spectacular but unfortunately lack any kind of challenge whatsoever and can be completed with no real need for any skill or indeed much concentration on part of the player. Venturing through the various locations of Saw 2 quickly becomes quite tiresome as a result. New areas and puzzles that once brought a sense of trepidation and uncertainty quickly become a chore due to the fact they have been seen so many times. I found myself running through the environments with no sense of fear, simply to get to the next puzzle as quickly as possible.

Saw 2: Flesh and Blood is a rather mediocre title that will only really please die-hard fans of the film franchise. Basic repetitive game-play and a general lack of challenge make what should be a tense and thrilling title filled with foreboding atmosphere, into a humdrum exercise in simple puzzle solving. Jigsaw needs to buck up his ideas if this is the best game that he can think of, I'm not scared.