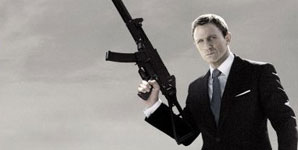 Quantum of Solace is the latest addition to the ever expanding catalogue of Bond games to follow the latest film release. However they all have something in common, they are all in the shadow of 'Goldeneye'. This is title that sets the acid test for all new releases, and whilst the previous Bond titles have been good (I even enjoyed 'From Russia with Love' that received its fair share of criticism) I think it is fair to say they never made the impact that 'Goldeneye' on the N64 did. On to Quantum of Solace.

Quantum of Solace, as with many film releases, suffers from a general rigidity in its development. It is constrained by events of the film and artistic licence is frowned upon. As a result the developers (Trevarch/Activision) adopted an overly cinematic approach to the game. This looks very well I may add, with futuristic graphics and lay outs, and makes a very good job of distracting you from the fact that you are just been told large chunks of the story without experiencing it yourself. However, after a few of the cut scenes and level bridges, you will be unable to resist the urge to just get on with the game and put an end to Judy Dench boring you with more technical mumbo jumbo.

The game itself looks very well, Daniel Craig resembles your on line character (if a bit rough around edges) and what you have is a very solid first person shooter. The aiming mechanics are good and with a bit of practice you will be pulling off consistent head shots time after time. On the other side of the coin, whilst hiding behind walls and objects is effective, your head is blatantly over the parapet. This just annoys me, despite the fact that you never find anyone good enough at shooting to pick you off. This brings me on to the enemies and random henchman. Initially you can tell that a bit of enhanced AI is at work but even this becomes a bit formulaic and predictable after a few run-throughs. Much like the levels unfortunately. It becomes a bit repetitive as you burst on to a level, take out a few lackeys, patch into the camera network, kill a few more expendables and then fight a 'boss'. The graphics are good along the way, the environment has a few surprises to catch you off guard and you find more interesting and lethal weapons but none of this surprises you in the end. The game is basically very linear in a time where we have come to appreciate a roaming aspect to our platform experience.

This brings us on to the multi-player facility. This is excellent as with previous Bond titles, but at the same time is one of my major gripes. Hop on to the online multiplayer and you will find various options from the traditional 'Death Match' and 'Golden Gun' to 'Dominator'. With a variety of venues and team options that will bring hours of fun, more so if you have a private match with mates rather than randoms, but then this is always the case. This however links me nicely to my gripe. It seems gone are the days where a few of you sit down in the same room, on the same console, and battle it out there and then. This is not just criticism of this title but of many new games. The online element to the next generation title is a hugely enjoyable option as far as I am concerned, but it should not be a replacement for the in house, off line multiplayer.

Quantum of Solace is a solid title that will please Bond fanatics if not first person shooter fanatics or 'Goldeneye' disciples.