PES or FIFA, FIFA or PES? It's the ongoing battle of the footie sim heavyweights, and after the release of the best FIFA yet can Konami's kicker still compete? Long ago there was no contest, the sheer responsiveness and colourful graphics of the PES experience was leaps and bounds ahead of the stale and traditional FIFA games. In the last few years however the gameplay gap has narrowed considerably and with the weight of official club and national licensing on FIFA's side, the pressure is on Konami to deliver a sequel that overcomes a lack of licensing with sheer playability. Look no further as PES 2011 is here, in a fresh new kit and with some great new features and options to tinker with. Come on London United! 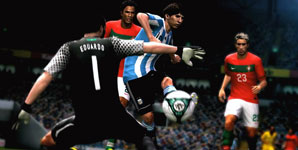 As ever, the pick up and play philosophy is at the heart of the game, and as any pundit knows, passing is at the heart of football. PES 2011's slick and intuitive new controls make precise passing positively pleasurable. Gone are the frustrating mile wide punts that plagued previous incarnations, instead it's easier to weigh passes properly and reliably land the ball at the feet of your team mates. Team mate AI seems improved as well, which sees them running to meet wayward balls more readily than before and compensating for those passes that do go a little further or wider than intended. As a result the passing game feels fantastically natural and allows the ability to move your men up the field in a much more dependable and solid manner. The fluidity of play that this brings is a welcome antidote to scrappy matches and reinforces the accessibility of the franchise.

This ethos is also evident when playing on the back foot. Battling for possession is very much about timing and skill, and if you can realistically position your men and time your tackles well then more often than not you'll do well. More ambitious challenges do sometimes succeed but if it looks like it wouldn't work on a real pitch, it probably won't work on a PES pitch. When it comes to actually shooting, its business as usual, but with improved animation meaning that the shots that hit home look even more spectacular than before.

Away from the game, PES 2011 comes with a detailed stadium editor and the usual wealth of opportunities to tinker with formations, teams and leagues to your heart's content, of course if all you want to do is play your friends or the computer you don't even have to touch the options, but it is good to know that they are there for those who do want a deeper experience. Although not as generous as the features contained in FIFA 11, where PES does shine is the inclusion of an all new online master league allowing players to compete across the world to take their teams to the top. Utilising a market system where players can be bought and sold with money earned from matches and tournaments, it is a great addition and has the potential to be very addictive. If there is one unique selling point away from the great playability of the series, it'll be this. Likely all those Pro Evo professionals out there will be literally salivating at the thought of unleashing their skills on the world stage. Good luck to them.

By addressing some long term issues and throwing in a slew of new features and an excellent on-line component Konami has skilfully and successfully recast PES as a serious contender to FIFA's throne. If you can get past the lack of team licensing then you'll find a football sim that's every bit as playable, if not more so, as FIFA. What PES 2011 lacks in realism it more than makes up for with accessibility, pick-up-and-playability, and by importantly not taking itself too seriously. It's the slickest and best looking football game that you can buy, and one for those who aren't too precious about team names and just want to have fun, which includes me.