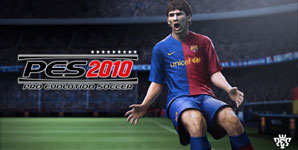 The presentation for the nth edition of the beautiful game from Japan seems to have gone up a notch, on first look. It's competing against FIFA 10, which stole the lead in the perennial competition last year, or the year before that, by shifting the focus to a realistic game whilst keeping the slick presentation and the full license intact.

Returning from last year is the UEFA Champions League, playable as a complete tournament from cradle to grave, or, as part of the ever present Master League.

With the presentation, Konami's marketing department have stretched to licensing Lionel Messi and Fernando Torres, and, they certainly made the most of the afternoon of mocap made available to them, from the overly long intro complete with overblown orchestral scene and a strange third act twist whereby after playing, the two of them walk onto the pitch together, as if they were the only players in the world. Of course, as this is Pro Evo sans FIFA license, that's mostly true. We get a few British clubs but nothing really new- Spanish and Italian fans will likely be a little more excited as there's good representation there.

It's in the menus that most of the changes to the game have taken place- slicker, faster and with more options. When it comes to the actual setup for the game, there's a lovely auto-selection for the squad, a Team Style selection menu allowing us to select general options for the way the team plays, and a new section of the player info known as Player Cards, which essentially means a change in the way statistics are represented. Stats also change dependent on the position in which a player is placed, adding a greater depth to manual formations and strategy.

The game hasn't really changed that much. It starts off a little slow, a little insensitive and generally not that great, but as I get into the 5th or 6th game of the Champion's League on the standard 3 star difficulty, it begins to click. Beyond the nauseating try-hard repetition of Handel's Zadok The Priest (the Champion's League music) in various remixes, beyond the horrible commentary that makes you feel like you're playing the game wrong- it all took a back seat to the slick plays, as I started to get used to the controls, how to 1-2 pass, running tactics (counter attack being a criminal non-default option at the start). I think it's when I became accustomed to the pace of the game, and stopped trying to artificially increase it by sprinting everywhere that it began to gel.

So, after spending a solid weekend with the game, I fell into the Master League mode with a passion, and it's just as good as it ever was, but the 'Become A Legend' mode is nothing on FIFA's 'Become A Pro'.

Master League takes the best parts of the game and bundles them all together with a level of strategy that puts most RTS' to shame. It's here and multiplayer that the game shines and this is where Pro Evolution Soccer 2010 can truly dominate your winter. A Master League team between two people can be a great time sink, and the round robin style multiplayer still excels. Online is a little lacking.

If you're a fan of the Pro Evo series then you'll have this already, but for those neutrals and anyone just looking for a good football game, you can't go wrong here, but you can do better. It's a shame, because Pro Evolution Soccer 2010 is one of the best Pro Evo's yet.