Read our review of Pro Evolution Soccer 2009 on Sony PS3 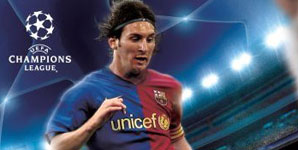 Writing a Pro Evolution Soccer review has become quite repetitive over the years. It has been a case of unparalleled game play, lack of licenses, likely to lose the more casual gamer to FIFA, etc, etc. However, there was a slight scent of change in air for the 2008 editions. Whilst PES made the usual subtle changes to its game play in an attempt to slowly but surely get it exactly right, it neglected the other elements of the game. In areas such as online game play, interactivity between online & offline gaming, interactive news and in-game mini games, Konami did not move whilst FIFA took off. This brought the all round appeal of the titles as a whole closer together. You had the supposed superior PES game play fighting on its own against the FIFA license catalogue equipped with a variety of different gaming scenarios, a well developed online experience and interactive statistics. So with the 2009 releases, how did Konami cope with the leaps made by FIFA and the criticism levelled against it the last time out?

Well in a nutshell, there has been a response. Again there has been an attempt to acquire more licenses in this case all Manchester United & Liverpool rights, as well as the England national team and the Champions League. The latter becomes a new gaming option as well, as you are tasked with taking your chosen team to Champions League glory. The right purchasing has again been done in the inimitable PES 'slowly, slowly, catchy, monkey' style and is not really paralleled again to the depth of licenses of its main rival. So once again, if you want the real names of team and players, then you have to act as an amateur data cleanser - again this is not going to capture the imagination of the casual gamer or the lazy, come to think of it. Finally on this, there is not as much for those supporters who suffer outside of the Premier League on PES 2009, whereas FIFA still caters for the lower English Leagues

I touched on the gaming options with the addition of the Champions League mode. Also new to PES 2009 is the 'create a legend' mode. In this option, you control one player and one player alone as you attempt to navigate your own career. [This mode takes me back to the same option available in 'Kick Off 2' back in the halcyon days of the Commodore Amiga, but enough of my distressing nostalgia.] Your career progresses through a standard Master League format (which also returns in its usual format) and the more play the better you get. The start off playing practice games before breaking in to the first team as a substitute with the challenge of getting in to the first team. This is also an online option as you can enter your player into online games. All of which brings me nicely onto the online element. Thankfully this has had some attention and is now a lot more fluid than the last attempt. The games support up to 4 online players who can now 'call' for the ball from one another. The online functionality I would say is where it should have been in PES 2008, and as a result probably needs another outing to catch up with FIFA in general - even if you don't take into account integration of functionality between the offline and online modes.

So on to the game play itself. My first impression was the Konami had tweaked the game play in certain areas again. However, the more I played the more I realised that the game had been slowed somewhat as ball retention had become an art rather than something that was expected. This is not a criticism at all, as this adds to the realism of the game. The play is now not as gung ho and automatically fluid as it was in PES 2008. However, tackling has now become more of an art form as well. It is not possible to just hold down the 'x' button and expect to win the ball. Rather you have to time your tackles to get the ball back. The shooting system has also been refined but now more difficult to master and is seemingly a bit laborious. However, I get the feeling that once mastered this will be ultimately rewarding and a fine addition to the game. Finally, player statistics and attributes seem to have a real difference in ability rather than a passing resemblance. A lofted ball to Messi can be plucked from the air before turning on a sixpence and laying off an inch perfect pass. If you try that with Titus Bramble then you're in for a rude awakening.

Finally, the commentary is as irritating as ever (for the love of God, sack Lawrenson off) but the graphics, specifically off players, is better than ever. If you want the better football experience then PES 2009 is back to its best and arguably remains the title to buy. However it may have to improve further off the pitch and online to become the better all round package.