Read our review of Prison Break: The Conspiracy on the Sony PS3

Fuelled by money hungry concerns, often rushed and frequently devoid of any imaginative spark or creative gameplay elements, the movie licensed game has a poor track record. We reside in the golden age of computer games, a place where for every Modern Warfare or Assassin's Creed there's a quick cash-in production or a cheap spin-off around the corner waiting to sucker an ill informed punter into parting with their cash. Even more nefarious is the TV show tie-in game, rarely if ever have these been anything more than badly thought out exercises in boredom and frustration (see 24, The Sopranos and Lost). Yet these games are still being made, in such a market oriented culture this can only mean that they are still profitable. Enter Prison Break: Conspiracy, the latest result of market research that proves that people who really enjoy a TV-show will buy any old rubbish as long as the show's logo is plastered on it. Nice one. 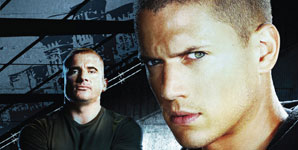 For those who are unfamiliar with the TV series, it concerns Michael Scofield, incarcerated by his own choice in a high security prison in order to break out his falsely convicted brother before he faces the electric chair. In a twist, instead of playing as the main protagonist, you are instead cast as Agent Tom Paxton, member of a shadowy government agency, who is sent in undercover to observe Scofield and co and ensure that his brother makes his date with ole' sparky. In gameplay terms this means running around a prison fetching things for the inmates and guards, engaging in meaningless, one-dimensional fights and enduring frustratingly flawed stealth sections. Nice one.

Most actions in Prison Break: The Conspiracy are accomplished by hitting the buttons that appear, large as life, on the screen. Although sometimes appearing in dodgy quick time events, mostly they serve as a constant reminder of which buttons to press and when. Coupled with the radar, this means that the vast majority of the game requires pretty much no thought at all to play. Moments in the game where skill is required can be found either in the fighting, or the sneaking sections. When fighting the various street-talking tough guys of Fox River State Penitentiary you can use strong or light punches, block, move around a bit and eventually use a finishing move. That is it. Fights are clumsy and badly animated, punches don't look like they connect and success can be reasonably assured by simply using the same tactic over and over again. Nice one.

When a more cautious approach is required, Tom Paxton falls into stealth mode. Achieved by squatting slightly, Tom can avoid guards and cleaners and bound his way across rafters and up ladders in a way vaguely reminiscent of Uncharted, but a lot more clunky and uninspiring. To make matters worse, the slightest glance of a guard sees you whisked back to the start of the section to try it all again. There is no opportunity for hiding once spotted, or for preemptively attempting stealthy takedowns either. Your routes through the game's sneaking sections are inflexibly planned out for you and you are allowed not much room for error or for exploration. Understandably, this leads to a lot of frustration. Mix all this with the game's terrible graphics and cringe worthy lip-syncing and you've got a genuinely painful gaming experience. Please, please I urge you, do not buy this game. Fans of the TV series boycott it and send a message that you will not accept such rubbish and that you demand more for your money. Hopefully then the terrible sales will force developers and producers to wake up and starting treating their licenses with respect, making good games out of them, or not making them at all. What a better world this would be for all. Nice one.