Crossovers between franchises are generally a big gamble for studios and there tends to be no real formula for what makes them good. Crossovers that you would imagine to be terrible can sometimes really prove themselves (see the Kingdom Hearts franchise) and ones that you would imagine to play really interestingly can be rather poor (see Mortal Kombat vs DC Universe). 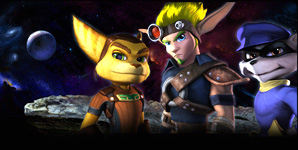 Enter Playstation Move Heroes, an idea that looks great on paper: the protagonists from the Jak and Daxter, Sly Cooper and Ratchet and Clank games (three franchises with similar gameplay elements and aesthetics) join forces to fight a threat to all of their respective worlds. Does it work? Yes, although I have to add that it could work a lot better than it does and it's quite hard not to feel disappointed by the whole experience.

The story starts with all six characters being pulled from their worlds by two purple squid-like creatures called Gleeber and Lunk, to a strange planet occupied by a race of little green blobs called Whibbles. We soon discover that our heroes have been summoned to this realm to compete in an intergalactic competition to prove their mettle as heroes. However the alien duo are not all they seem... (It is a crossover game, are you expecting anything more than that?).

Gameplay consists of a bunch of minigames spread across warped versions of environments from the three original franchises along with one new world which is home to the Whibbles. The minigames can be broken down into five different challenges; staying alive until the time runs out, protecting three ships until the time runs out, finding and destroying numerous pods containing Whibbles, finding numerous baby "Whibblets" and returning them to their mother, and finally a shooting game. Admittedly the game does shake up the limited objectives by switching around which weapons you need to use so, depending on the challenge, you could be using a melee weapon, a laser whip, a Move controlled Frisbee, a Move controlled bowling ball or some sort of ranged weapon (either automatic, shotgun or grenade launcher). After completing your challenge you are graded according to how much of the objective you managed to complete, landing you a bronze, silver or gold medal.

The Move controller is integrated well enough in the discus and bowling modes which are probably the most entertaining parts of the game. Unfortunately the same cannot quite be said of the melee and whip segments which don't quite offer the one-to-one motion tracking that has been used in other Move titles. It will only detect the general direction in which you are flailing which can be frustrating with a technology as mind-bendingly precise as the Move controller.

Another missed opportunity here is the multiplayer. The concept of these dynamic characters competing in scored minigames is screaming out for a local multiplayer mode which is present but limits the second player to being an on screen crosshair shooting collectibles in the same vein as the cooperative mode in Super Mario Galaxy 2. Had it been integrated with perhaps a split-screen cooperative or versus mode then Playstation Move Heroes could have become a party game to be enjoyed by numerous players which almost certainly would have added to the overall experience.

Despite all that I've said, I can't deny that I had fun with Playstation Move Heroes and I'm sure that others will too, although disappointment is bound to occur when faced with the short length of the game and the lack of variety when it comes to the games themselves. Unfortunately it suffers from numerous problems which combine to create an experience that is enjoyable for a brief period prior to becoming formulaic. The repetitive nature of the challenges and the lack of distinct narrative make for a forgettable experience and a wasted opportunity.