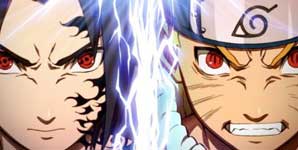 I am reliably informed that the animated fighter title 'Naruto: Ultimate Ninja Storm' is based on an animated TV series which I have never seen. Please ignore my pathetic ignorance of the source material.

In: N:UNS you take control of the lead character Naruto Uzumaki. He is animated (obviously) and a bit too bright a colourful to be any kind of stealthy ninja in my opinion, but this doesn't stop the fact that he is, apparently, a ninja. Trust me he isn't going to sneak up on anyone dressed like that unless it's in a bar San Francisco.

I've no doubt that your first port of call in N:UNS will be straight into the combat option. well tough. First you have to download what seems like the entire game on to your hard drive, a good 4GB that will take around ten minutes. go make yourself and brew and put your feet up whilst you are waiting. done? Good, we're ready to go. Now you can go to the Free Battle mode, choose your favourite character and fight away. The controls are simple enough with the main buttons used for attacks and the shoulder buttons used for blocking and throwing. The action seems simple yet fun with a roaming camera angle that starts of as annoying but once you are comfortable with it you will wonder how you ever did without it. You can produce combos, evade, block, melee attack, jutsu (block just before a hit lands, evade and teleport behind your opponent) and use the chakra. You will have a certain amount of chakra energy that can be used to make your existing moves more powerful. When you use the chakra, the longer you charge it up, the more powerful your attack will be. You can use chakra energy in combination with any other attack, be it melee, jutsu or just a standard punch attack. These combinations will result in various special attacks for you to master.

The main gripe with this is that only 12 of the 25 possible characters are available to you at the outset. To unlock the others you will have to endure (yes, endure) the single player platform game. You will also have to opportunity to unlock further combinations, moves, outfits & modes in the Free Battle. The Ultimate Mission mode is generally a collection of battles for you to win (good) and mini games for you to complete (bad, very bad). These mini-games include having to play hide and seek or to race up trees, and are just blatantly awful. You'll find yourself getting angry that the producers are making you do this rubbish just unlock a new character.

The game looks very well and just as I would imagine the cartoon itself would. The environments, even in the awful mini-games, are beautifully constructed in coloured cell-animated art form. Hidden leaf Village being a great example. The sound also adds to an immersive experience. On the down side, there is no online multiplayer function.

In summary, we have a great fighting title here but one that has been made seemingly artificially long in duration with the addition of the mini-games to unlock characters to prolong the battle experience. I reviewed the game with a chap who poignantly described the game as a 'fighting game that wasn't a fighting game'. He had a point.