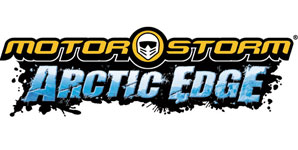 Sony's Motorstorm franchise first wowed crowds as one of the PS3's launch titles and now, nearly 3 years on, developers BigBig Studios are bringing it to the PSP via the snowy wastes and ice caverns of the arctic tundra. Combining high-speed visceral racing with intricate multiple-routed tracks, Motorstorm Arctic Edge is a unique racer for those who don't take their driving too seriously.

The main premise is an icy racing tournament where all types of motorized machines, ranging in size from nippy dirt bikes all the way up to lumbering big rigs, fling themselves around twelve ice themed tracks. Although only twelve in number the tracks are easily the star of this game. Each is full to the brim with secret shortcuts and alternate routes which see your racer hurtling over chasms, through subterranean vaults, and across rocky snowy passes. These routes are a real pleasure to discover and really help make each track feel unique, especially considering that there are as many different types of vehicles for you to race with as there are routes, with lighter bikes and buggies zipping over the top of the trucks and snow cats which plow down the muddier central avenues. Each type of vehicle behaves differently and requires wildly different tactics. This ensures that the same track plays and feels very different depending on your weapon of choice. But one thing that can be said is that it is thrilling to play all of them. The jumpy handling of the bikes, the breakneck power slides of the rally cars and the unstoppable chug of the larger trucks are all immensely satisfying and it's hard to choose a favorite. Generally the handling is robust, but at higher speeds it can often feel too light and some suspicious physics and dodgy collision detection often ruin any sense of realism.

But this is not a game for racing accuracy, for a start each car is equipped with after-burner-like super boosts that can launch your vehicle ahead of the rest but at a risk of blowing up if you overheat them, (which the computer player is quite prone too). A nice touch is the ability to cool your boosts down by driving through deep snow or water, an important tactic as success in Motorstorm Arctic Edge is largely down to judicial boosting at the right places, as boosting at the wrong place can easily send your car flying off the edge of a precipice or straight into the wall of a cavern.

Motorstorm Arctic Edge holds up very well graphically, the cars look solid and the tracks are detailed. Atmospheric effects like snow, rain and splashes of mud are done really well and add finesse. Sound wise, the crunches of metal and scream of engines all fit well with the frantic action and the sound track, including The Prodigy and Chemical Brothers suits the pace and keeps the adrenalin pumping.

The single player career mode - festival - sees your chosen driver entering various races, earning points to increase your racing rank, thereby unlocking the harder races and challenges as well as customization options and new vehicles. The difficulty really does ramp up in the later portion of the career mode, early on it's a real challenge not to come first every race as your computer opponents blow themselves up all around you, but later you'll have to use every short cut and dirty trick in your disposal just to keep in sight of the top three. Other modes include, the obligatory time trial and a free play mode which lets you customize a race allowing you to explore the labyrinthine tracks without impunity in order to best plan out your alternative routes. There is also a solid multiplayer mode which will keep you occupied for a few hours racing online (if you can find any online PSP players) or with friends over WiFi. A joy that was sadly lacking from Motorstorm's first appearance on the PS3 but one that works well here.

Motorstorm Arctic Edge is a real success. Sublime exploratory racing and a solid handful of single player and multiplayer modes are only marred by slightly oversensitive controls and excessive load times. Easily the best racer currently available on the PSP and one which will hopefully breathe new life into Sony's flagging handheld.