Read our review of Modnation Racers on the Sony PSP

The portable version of Sony's pretender to Mario's crown, Modnation Racers PSP is a bold attempt to topple everyone's favourite plumber from his undisputed position as king of the kart racing games. Nobody has even come close to achieving this before, so what's Modnation Racers got that Mario hasn't? Well, in a similar vein to Little Big Planet and sharing its 'play, create, share' ethos, Modnation Racers brings an element of customizability to the table with the ability to edit your cars, drivers and even create and share tracks yourself over PlayStation Network. But is it enough to challenge Mario and co? Well let's see...

There is no doubt that the wealth of editing options is impressive. Everything down to the colour of your eyes, to the types of tires you drive to the steepness of a bank on a track can be tweaked to your liking. Much like Little Big Planet, most of the customizable content is locked away until you progress through the single player game. Where, by completing challenges, you can access more and more items and styles with which to paint your mark on the Modnation universe. However, unlike more serious racers, customization of your car is purely for cosmetic value and has no effect on how your car handles or its power. That said, it still fun to tinker with spoilers, exhausts and decals to achieve your desired style, for a little while at least. Unfortunately for a game that relies so much on customizability, the vast majority of selectable themes and tweaks fall into tired, well travelled styles collectively known to Americans as 'zany'. The same also goes for the games characters which only young children could really find engaging and cool, having as they do, the collective charm of a bucket of sick. 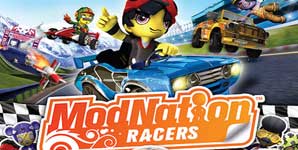 That all said, one modification option that doesn't disappoint is the built in track editor which, with surprisingly quick load times, allows the player to create a track completely from scratch. The tracks can be twisted in any direction you choose and warped to your heart's content with banks, slopes, tunnels and jumps. The surrounding countryside can also be molded, painted and populated with a good selection of props which range from foliage up to full scale TV towers. The editor is easy and intuitive to use and is by far the most enjoyable customizable aspect of Modnation Racers. I can only imagine the number of unique user generated circuits that will flood PlayStation network in the coming months.

However, the success of any racer will always come down to how fun it is to actually race, and in this aspect it's impossible not to compare any new game to the granddaddy of the genre, Mario Kart. And like so many other before it, Modnation racer just doesn't really cut the mustard. Carts feel slightly too flimsy and light and the handling seems jumpy and unrealistic. In addition the subtle differences in weight and acceleration which allow for such variation in gameplay in Mario Kart are missing here, as every cart is the same. As you barrel down tracks, you can assault your competitors via the usual collection of uninspired collectable weaponry (missiles and mines) but also with the nice addition of side swipes and stomps, executed by a deft tap of the d-pad when you near an opponent. Performing takedowns and splatting opponents with weapons fills up an energy meter, which can be used to boost or activate a temporary shield, allowing for some slight tactical decisions and it can be quite frantic and fun in places.

Overall however, it becomes apparent, after a few laps round the game's mostly well designed circuits, that Modnation Racers is simply lacking in depth in an indefinable but un-ignorable way. Without this, it's hard to see it capturing the imagination of older gamers for very long. An accomplished track editor does go some way to make up for this however, and there are plenty of racing missions and challenges to get your teeth stuck into. Younger gamers however will probably delight in its simple and unsubtle gameplay. They may even crack a smile or two at the cast of charisma-less characters.