Review of MAG on Sony PS3

Review of MAG on Sony PS3

MAG, standing for Massive Action Game, is a game based around a single, very impressive idea. 256 players online, fighting at any one time. This sounds genuinely fantastic- a console has never seen this number of players going at the same time, and it shows a lot of ambition to even attempt it.It goes against what has been somewhat of a paradigm shift in the industry over the past few years, what with Microsoft announcing Natal and Nintendo's continued success with the Wii, it seems like bigger is no longer better; people don't care about polygon counts quite as much as they used to. The AAA titles, the Modern Warfares and the Halos are no longer judged on frame rates or even length, they're judged on script, on gameplay, on replayability. 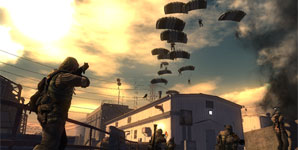 So is MAG a shot in the dark, or does it reflect a backlash from developers who wish things were the way they used to be? And more importantly, how does it work out?

It turns out it doesn't work immediately well. A long grind with little in the way of help or tutorials (the one tutorial the game provides you with is full of bugs), but persevere and past the first few character levels, it starts to click. You'll start off playing in 32 man matches with your own faction; picked irrevocably at the start of the game, and once you've got the basics, you'll probably have leveled up enough to unlock the 128 and 256 player battles the game lauds and presents itself as. But again, there's no explanation as to how to unlock new modes, and leveling up is almost invisible.

Character expansion isn't vast, the odd new gun can be bought but it's really just tagged on, and lacks polish. The game feels rushed. These 256 player battles feel little bit stilted as well, owing to the 32 man squads the players are shoehorned into- so you never really feel like you're part of an army. This disjunction can jar in the early parts of the game, leading to problems; you never really feel like you're part of a team unless you end up with a really good commander (more on this later) there's nothing that really happens, nothing tying the game from a blank free for all into a focussed wargame.

But beneath this unpolished exterior is a, well, average FPS. Guns don't have any weight to them, and if you're not playing with a vibrating controller, there's definite disconnect between pulling the trigger and well, pulling the trigger. Coupled with relatively poor controls, it leads to problems that can force a player's hand in stopping the game early. As it's multiplayer only, even at this point in the game's life cycle, other players are already of a fairly high skill level and it can be quite hard to get to the point where the majority of the game is unlocked.

Once you get there, though, it starts to finally, finally pick up. At a certain level, you can become a leader of the troops, meaning you can pick various objectives for your team to undertake- and it's in their best interests to do so, as it grants additional experience which accelerates their progression when it comes to leadership. These various orders you can make actually make a large difference, and it's here that you can start to appreciate the game. When you have that one match that makes you sit back in awe afterwards, you'll be glad you gave the game the time of day. It's no Modern Warfare 2, it's certainly no Team Fortress 2 and it's unfocused and unpolished.