As one of the most innovative and stylish games to have ever been released on the PlayStation 3, Media Molecule's LittleBigPlanet captured the hearts and creative minds of thousands of gamers. Set in a colourful DIY world of crayons, stickers and fabrics, players controlled the lovable canvas-clad Sackboy in a family friendly platforming adventure. But it was the creative tools included in the game that really stood out. They allowed players to create their own levels that could be shared over PlayStation Network, resulting in over 3 million user creations to date, along with a passionate and dedicated community. It's no wonder then that Sackboy's new adventure has been eagerly anticipated, but is LittleBigPlanet 2 another creative revolution, or does it feel like just more of the same? 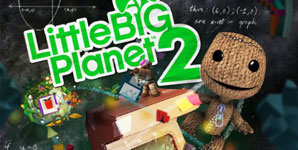 Cheerfully, those who played the original game can carry over all their hard earned stickers, costumes and objects into LittleBigPlanet 2. Setting out with Sackboy kitted out in the same clobber as you had him last sets up a nice continuity between the two games. Controlling Sackboy even feels the same, the same floaty jumps, grabs and swings as before. So what's new? Firstly the levels have benefited from a hi-tech overhaul and look better than ever. With a cleaner aesthetic and stupendous level design LittleBigPlanet 2 is absolutely beautiful. Every character, obstacle, backdrop and puzzle positively oozes charm. In fact, the game's single player levels are so witty and captivating that my face hurt from grinning with the sheer childish bliss of it all. To keep things varied and interesting, LittleBigPlanet chops and changes between game genres effortlessly. One moment you'll be launching cakes out of a hat, the next piloting remote control hamsters and being fired out of cannons. It's this richly imaginative gameplay that really shows off what the built in editing and creation tools can do, there is quite literally never a dull moment. The new grappling hook tool is another great inclusion to the game, providing a new way of swinging and climbing through the levels and some awesome new puzzle opportunities on top.

Although the story mode is fantastic, it's even more fun when played along with friends, be them online or sitting next to you. Co-op play, one of the joys of the first game, is still as compulsive and hilarious as before. Supporting up to 4 players at once, LittleBigPlanet's carefree and fun feel is never more evident than when multiple Sackboys (and girls) join forces to jump, dance, fly and swing through the levels, many of which include special bonus sections that can only be completed with the help of a companion or 3. The social aspect of the LittleBigPlanet world is one of its big draws and remains as strong as ever, thanks to the portability of the 3 million or so user generated levels designed for LBP1, the second game is already blessed with a hearty fan base and it won't be long until there are an equal number of user created levels specifically for it.

Thankfully the creation tools have been significantly overhauled and are much easier to use than before. Although still unwieldy at first, it's apparent that Media Molecule have tried to make them as accessible and as user friendly as possible. In addition it is now possible to do much more in create mode, thanks to a vastly enlarged library of triggers and logic gates, than ever before. Pretty much anything you can imagine can be created. You want to build a giant battle ship that cracks in half and sinks? Simple. How about an army of clouds that rain exploding puppies? Piece of cake. The power and potential of these new tools makes the prospect of future user created levels very exciting indeed.

Although LittleBigPlanet 2 is clearly a fantastic game, it is not without its faults. Controlling Sackboy can sometimes be frustrating, especially as his floating jumps are hard to gauge accurately in the way say Mario's are. Also, when playing with multiple players, the screen can get a bit cluttered and confusing, leading to accidental deaths. Thankfully the inherent charm and playability of the game more than makes up for these shortcomings and the 'just one more go' factor never really wanes. More than just an update, LittleBigPlanet 2 is a truly outstanding example of how imagination and community combined makes for a truly unique game playing experience. I cannot recommend it enough.