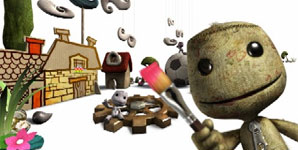 There is little about Little Big Planet that could not be described as adorable. From its plucky protagonist Sackboy, to its lush paper and card landscapes to Stephen Fry's witty voiceovers, Little Big Planet is an inspiring, quirky and yes, adorable game. As a scaled down version of the hugely popular PS3 title of the same name it is exemplary of how squeezing a console game onto a handheld should not mean scaling down the quality, as pretty much everything that made its big brother so successful can be found on this PSP version.

Set in the 'imagisphere' (the place where all the ideas in the universe end up) you control Sackboy, a loveable little homemade scamp on a quest to join in the creator carnival across 30 brand new for the PSP levels. Along the way you'll travel through locales as diverse as the Australian Outback, the Orient and the Middle East as you jump, swing, grab and fly your way to the carnival. Essentially a 2D platform game at heart, Little Big Planet is brought alive by the imagination and creativity of its level designers. One minute you'll escaping an angry dragon on the back of a rickshaw, the next you'll be sneaking into an Arabian thieves den, all realised in gloriously colourful and temptingly tactile materials. The homemade aesthetic is evident throughout and the charm it lends to the already impressive diversity of your adventures keeps Little Big Planet from ever looking dull. To further add to the visual treat, Sackboy can be dressed up in hundreds of costumes and stitched out of any material you could desire, though admittedly the appeal of this feature is reduced somewhat due to Sackboy's newfound tininess on the PSP.

As a platformer, although cutesy it may be, easy it most certainly is not. There are some real tough moments in the later levels that require split second timing; thankfully the controls feel a little tighter this time round. Sackboy still has a lightness to him that makes it seem as though he is floating about on larger jumps but on the whole it is a lot easier to time leaps and land in the right place than it is on the PS3 version. Some minor annoyances still persist however, such as the inability for Sackboy to jump any higher than a foot off the ground when he is close to walls, forcing you to take running jumps for even simple steps, but this is something you soon get used to. There are enough checkpoints strewn around this time to ensure that dying on a tricky jump or swing, (or more likely swing, jump, grab, spin, jump, swing then jump) is never too frustrating. With the arrival of unlimited lives, dying is made much more forgiving this time round as you can retry difficult sections over and over again with the only penalty being the loss of 200 points, a much more player friendly approach than the PS3 version's.

But of course, the single player experience is only really half of the game. For those unfamiliar with Little Big Planet (shame on you!) the main idea is that everything you see whilst you bound through the colourful levels has been created via the built in level editor. This editor, should you so desire, can be used to construct your own levels and fiendish puzzles exactly as you imagine them. It’s a sort of DIY tool kit for making your own worlds which you can in turn upload to the community moon for others to enjoy. It is a fantastic idea in principle, only let down by the practical reality of level design. Namely that creating anything that looks and plays as well as one of the inbuilt levels will take weeks of perseverance, careful design and attention to detail, the end result of this being that the vast majority of user levels that I downloaded and played from the 'community moon' were completely awful. But this does not need to be the case. The editor is powerful but relatively intuitive (if fiddly) to use and its shortcuts can quickly be picked up.

The potential for this approach to user generated content is phenomenal and with the news that Little Big Planet PS3 has reached its 1,000,000th user created level there is nothing stopping the PSP version from reaching the same dizzying heights. I urge every PSP owner to buy a copy of this game and put a bit of their time and hard work into creating some great stuff, I ask this selfishly because I want to play them. I love this game. Right now I’m working on a Little Big Planet Remake of the first Alone in the Dark game, I’ll see you there!