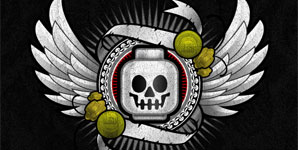 I've never understood the recent trend for 'legoifying' popular franchises. We've had Star Wars Lego games, Indiana Jones Lego game and soon Harry Potter will succumb to the Danish blocks, and it has always seemed to me to be an exercise in combining two great things together to make something rather mediocre, if briefly entertaining. But I guess until the popularity for Lego branded video games ends and the money stops coming in, we're gonna see a lot more of them. Cue Lego Rock Band, a game that attempts to combine the 'fun for all the family' ethic and iconic aesthetic of the Lego brand with the hugely successful rhythm action of Rock Band but ultimately (you guessed it) creates something not quite as good as either.

As a rhythm action game it plays pretty much identically to its more mature cousin, allowing up to 4 players to strum, bash and wail their way through a varied medley of well known (and lesser known) songs. To do this, a cavalcade of colourful blocks fall down a fret board and players must tap and strum the same coloured buttons when the blocks hits the bottom. It's a beautifully simple idea and one I'm sure most people are familiar with due to the meteoric success of Rock Band and its nemesis Guitar Hero. The winning formula remains the same here although somehow feels a lot less satisfying than its predecessors. Button patterns generally seem to correspond less to the audio you are hearing and feel slightly unresponsive at times (even after a calibration), which sullies the 'rock star' feeling found in other games. The visuals also fall too far on the side of cutesy to ever be described as spectacular, giving the whole experience a much tamer feel than the similar titles. Though I guess for a family oriented title, it's to be expected.

Ultimately however, the relative success and failure of any Rock Band game is always going to come down to the actual songs chosen by the creators for you to play. If no one likes the songs, no one is going to want to play the game. Here the selection is limited to forty five 'family friendly' tunes and to be fair it's a pretty mixed bag. There are some absolute classics (Let's Dance by David Bowie anyone?) and some real stinkers (KT Tunstall) as well as a worrying prevalence of pop-punk and middle of the road rock which, although not appealing to me, will definitely appeal to younger players and stays well within the acceptability of mum and dad. Not all the songs are actually great to play on the guitar however, a lot of the more modern songs are pretty repetitive, especially on lower difficulty levels, and the songs I wanted to play never really felt as good as I thought they would in theory. The addition of a 'super easy' difficult level also opens the game open to the younger market as successful completion of the songs only requires a few abstractly timed strums and no button presses. But bear in mind however that expert still remains extremely difficult.

Keeping in theme with the rest of the franchise, Lego Rock Band is choc-a-block with customizability options, unlocks, upgrades and collectables. You can customize your own rock den, tour bus and the appearance of every band member in your motley crew (no pun intended, they've no place in a family game). Unlocking new instruments as well as artist likenesses such as Iggy Pop and David Bowie add a nice collectable element and make for a good step for introducing your youngsters into 'real music'.

It worries me how much I sound like my dad in this review, but I think that's the point. As a game for adults who are fans of Rock Band and want to play it with their kids in a more accessible way, it succeeds hands down. As a game to be played on its own for its own merits, it is just above average due its limited scope and small set list. Quite simply, it's not as much fun as real Lego or real Rock Band