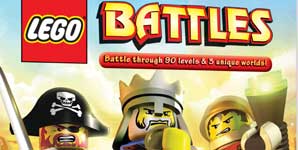 LEGO has been developed and made in Denmark since 1932 and is still one of the world's favourite play materials. LEGO promotes creative thinking and imaginative design in children and is one of those toys that your parents don't mind too much.

LEGO has, over the past five years, made an unlikely transition to our games consoles and now on the handheld Nintendo DS, TT Games and Warner Bros. bring us LEGO Battles. Like all the previous LEGO games you will find that LEGO Battles is both appealing and addictive which since you are parting with your hard earned money for it is surely good news.

In the game you build your very win LEGO bases and battle teams by mixing and matching units to create the ultimate customized LEGO squad, including mines, farms and castles LEGO Battles has all the features of any real-time strategy game.

You will find players hurriedly building their bases and collecting needed resources to constantly expand them. Players quickly try and grow their armies as well as their bases to build, gather or fight.

There is much diversity within the armies, especially with the cross-genre angle on this title. You will experience wizards fighting aliens, dragons attacking ninjas and pirate ships launching missiles at spacecrafts. Unique hero-type characters are also available for each LEGO group.

The game features 30 vehicles so you get the chance to fight on land, sea as well as in the air.

There's three different ways to play the game. First up is story-line mode. Story-line features six different races: king, wizard, pirate, Imperial, spaceman, and alien. The other two modes are free play mode, which lets you choose a side and opponent in a free-for-all, and local wireless mode, wireless enables two players with the game go head to head.

Controlling the game uses an intelligent mixture of touch screen and buttons and is really easy to use.

Overall with over 50 quality characters to go at and enough diversity in other key areas of the game-play you will find LEGO Battles to be a fairly addictive and simple to use "pocket size war" that you will keep returning to and will want to challenge your friends on.