Review of Legendary on Sony PS3 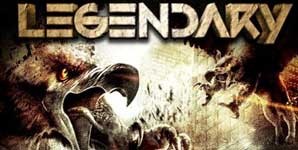 Legendary is another title to enter the highly crowded 'first person shooter' market that is becoming saturated as 2008 draws to a close and Christmas is on the horizon. Legendary tells the tale of an art thief called Charles Deckard. Charlie boy is conned into seeking Pandora's Box by a chap called LeFey and, on discovering it, decides opening it is a good idea. Unsurprisingly this is a big mistake as the box spews hordes of random beasties into the modern day world. Think werewolves and, the often mentioned yet misunderstood, Gryphons. As you might guess, these creatures don't like us human beings, so a full scale war develops.

The opening cut-scene looks well and there has obviously been some hours put into its development. The game begins to look like an immersive experience, with a dark atmosphere, but then the cut-scene finishes and you are thrust into the game. Unfortunately here the graphics don't live up to the billing. There are problems with freezing, pauses, cut-scene hitches and errors in the merging of the gaming environment. Suddenly the game is much less immersive. If you add on top of this an average-at-best soundtrack then you begin to worry. The constant environmental and enemy sound effects are okay and the voice acting has no major problems with it. However, the soundtrack is short and repetitive and would begin to get annoying, but it really is like background noises that you forget are there after a while. All of this might be not be too much of a problem though if the game-play was second to none.

But that was wishful thinking. The one thing more annoying than the physics of moving Mr Deckard, is the inability to aim your weapon. Even with the R3 crosshairs up, the movement isn't tight. This results in it being particularly difficult to see off a clutch of angry Gryphons when you are in ma bit of a squeeze. In which case you may as well try to run away. well good luck with that! It often feels like you are running on ice and woe betide you if you try and jump an obstacle to get away. Old Charlie boy must have the same power in his calves as a sloth because when jumping he makes it about an inch from the floor. Bizarrely however, eight foot gaps are a doddle. Go figure.

Legendary uses the tactic of absorbing defeated foes energy (Animus) in order to maintain your characters health. The main bug bear to this is it is not done seamlessly. Your character takes a quick time out to fully appreciate the energy he is absorbing, and in the meantime gets pummelled by Golems, Werewolves, Gryphons and the rest. Not too handy at all.

The concept of Legendary is great and if followed through with a bit of precision, efficiency and imagination, then this could have been a brilliant title. However all the bug bears add up to make it a thoroughly frustrating experience instead. Legendary does not live up to its name and will soon be forgotten as there is a raft of better first person shooter titles out there already.