Read our review of Sony Entertainment's Killzone 3 on Playstation 3

The Killzone franchise as a Playstation exclusive has often been compared (perhaps unfairly) to the unfathomably popular Xbox exclusive Halo franchise. Since the last Killzone game, there have been two Halo instalments; each one increasingly more celebrated than the last. Killzone 3 has a lot to live up to. But can it cut the mustard? You could be forgiven for assuming that it can't given the history of the franchise. Released in the twilight years of the Playstation 2's life, the original Killzone game was plagued with bugs, repetitive gameplay and bland environments so was not widely played. The second instalment managed to iron out some of the gameplay issues but added a bizarrely slow, lethargic and cumbersome control system. Additionally it suffered from possibly the longest release delay in videogame history (conveniently disregarding Duke Nukem Forever and Gran Turismo 5 of course). 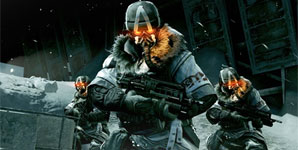 It is with absolute delight that I can report that this new slice of space opera loveliness has effortlessly surpassed all that its elder siblings attempted by ironing out all the gameplay faults, introducing varied locations and developing all the cardboard cut-out characters of previous games into fully formed individuals with distinct personalities. This latter improvement is noticeably better thanks to the vastly superior calibre of voice acting. Oddly enough the majority of returning characters are voiced by the cast from the previous game but are now delivered with all the relish you would expect at the theatre. Villains voiced by Malcolm McDowell and Ray Winstone add gravitas making the struggle of the two warring factions all the more intense.

The plot picks up within minutes of the finale of Killzone 2; the power void left by death of Visari, leader of the Helghast (the British-accented orange-eyed villains of the franchise) has led to conflict within their government. The ISA (the American gung-ho space marine heroes) are at a loss as to what to do next. However the prompt arrival of a new Helghast super weapon will soon put idle hands to work.

Killzone 2's movement felt like driving a HGV through mud. Luckily these issues have been dealt with and the movement is now fluid and responsive, reducing the frustration and difficulty commonly reported in the previous game. One element that has been retained is the method of turning valves that some may call innovative but that most would call irritating; you have to hold the shoulder buttons, turn the controller in a wheel-like motion, release the shoulder buttons, turn the controller back to the original position, rinse and repeat until the valve is sealed. Not only does this break up gameplay remarkably, it also feels unnecessary; a gimmick designed primarily to show people what the PS3's sixaxis sensor can do. However these sections are infrequent and a relatively minor issue when compared to the otherwise superb quality of the game. It should also be noted that the game can be played with a Move controller, however what you gain in accuracy you lose in manoeuvrability as the FPS/Move combination has yet to be perfected.

Environments initially get off to a bad start with the same dusty, gun-metal grey, post-apocalyptic landscapes that have become annoyingly commonplace in modern gaming. However the inclusion of a hazardous jungle/cavern section, some familiar snowy peaks and even a brief section on a space station soon shake things up. All of these locales are depicted with beautiful designs and stunning graphics that really push the limits of the system. Plus the entire game is playable in 3D for those of you lucky enough to own one of those gargantuan 3D televisions.

Some may be bored by the fact that the game is almost entirely gun battle after gun battle broken up by cut scenes, but they are immersive and accurately portray the thesis that is found throughout; war is bad. This is further highlighted by the extraordinarily downbeat ending. In spite of this, the game is extremely violent, gory and gratuitous, consequently making the pacifist theme hypocritical and schizophrenic.

The single player campaign will take around 8 to 10 hours to finish, but most gamers will be buying this game for the multiplayer which has been polished to an impressive shine and feels neither inadequate nor preferred when compared to the single player. You can choose a class which comes with a specific set of perks and earn upgrades that you can distribute in any manner of your choosing whilst still letting you alternate between classes.

I can safely say that Killzone 3 is not going to please everyone as it does depict quite horrific warzones and when compared to the more intellectually challenging Bioshock or Half-Life, the story could be considered to be lacklustre. But it is certainly an improvement on Killzone 2, better than most other first person shooters out there and if you let it take you in, you will be hooked right up until the gripping finale and beyond into the hours of multiplayer that await you