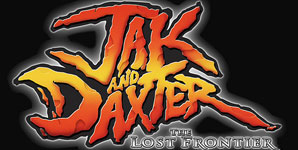 It's been a while since either Jak or Daxter graced a console with a new game and even longer since they appeared together. But now, 3 years after their last adventure, 'High Impact' have brought the duo on to the PSP, and its business as usual with some nice new twists and additions. A solid action platformer that overcomes some annoying niggles by both managing to capture the spirit of the original titles as well as add new gameplay mechanics.

With the world's supply of Eco (magic space energy) dangerously close to running out. Jak, Keira and the infuriating Daxter are forced to the edges of the world in order to find a new supply and save the universe. On the way they encounter some suave but sinister space pirates who attack the crew and force them to crash land whereupon they accidentally discover a huge raw supply of the precious Eco. Cue multiple levels of dog fighting and platform based gun play as you control Jak and co in a race to find the source of the Eco before it falls into the wrong hands.

So far so sci-fi, but in reality the story does little more than set up the scene for some good ole' fashioned Jak & Daxter gameplay. This time round however Jak's ability to morph into Dark Jak has been taken away (due to some eco trickery or something) and replaced instead with an upgrade system that allows dark eco collected from fallen enemies to be spent on various modifications such as new attacks, extra energy and so on. In addition to this, Jak is now equipped with a gun-staff which can be used to swipe and smash at enemies as well as blast them from afar, as it can also be fitted with a collection of laser weapons such as blasters and vulcan cannons.

Jak & Daxter: The Lost Frontier plays and controls just like its PS2 counterparts, despite the limitations of the PSPs crap control stick. Jak comes with an arsenal of spin kicks, double jumps and ground slams but it is the guns you'll be relying on most to dispatch foes, being far more effective than Jak's puny melee attacks, especially in the later levels. The downside to this being a lack of a decent aiming system, with no 'lock-on' or strafing available, lining up accurate shots is very much a trial and error affair. This is made even worse by the games slightly less than helpful camera which, more often than not, will leave enemies off screen forcing you to fire wildly in the direction that you hope they are. The camera often makes the games various platforming sections a lot trickier as well. Some distances and directions are made hard to gauge which often leads to mistimed and fatal jumps. Thankfully checkpoints are generously scattered about the game so you never feel too cheated when a dodgy camera angle leaves you hurtling to a fiery doom or splattered by off screen enemies. Dodgy camera issues aside, the levels are all pretty fun to play, difficult in places but with enough twists, jumps and shoot outs to make them entertaining.

Another thing new to Jak & Daxter: The Lost Frontier are levels where the terminally unfunny Daxter morphs into the mighty Dark Daxter due to quaffing too much of the nasty purple eco. Blessed with new abilities such as Tasmanian devil-esque whirlwind spins and ground shuddering punches these sections see Daxter smash through waves of obstacles and enemies all the while making yet more criminally awful jokes, (but this time in a slightly more tolerable baritone). Ultimately though, these sections seem arbitrarily tacked onto the main game and redundant in terms of the story. However they do break up the flow of the game sufficiently well and are infrequent enough to not become repetitive.

uch the same can be said for the games dog-fighting sections. Blasting bogeys whilst barrel-rolling will always be entertaining, and the same holds true here. It's a great feeling to unleash an armada of heat-seeking rockets at some pesky space pirates. However the larger aerial fights can often feel overly lengthy. Still the planes handle well and the various options for upgrading and purchasing new ships keep it from getting monotonous.

Jakk & Daxter: The Lost Frontier is a lively and challenging game with enough to see and do to keep fans of the series more than very entertained. Good graphics and solid audio all help to make this one of the better action platformers available for the PSP.