Read our review of Infamous 2 on the Sony PS3

The original Infamous wasn't nearly as popular as it should have been, despite being a great mix of superhero charged 3rd person combat and open-world urban exploration it just didn't capture people's imagination in a way that similar titles such as Assassin's Creed managed to. We can all be thankful however that it sold enough copies to justify Sucker Punch bringing us a sequel, as Infamous 2 manages to improve upon the formula in nearly every way and is a colourful and accomplished game. 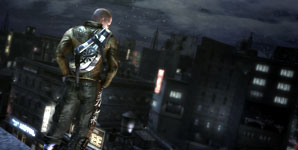 As in the first, you play as Cole McGrath, a bike courier and free-runner turned living conduit of raw electricity by a supernatural explosion. Cole can shoot balls of energy from his fingers and summon devastating ionic storms at will. But it's not enough to stop The Beast, a terrifying titan of rock and flame that is laying waste to the east coast of America and who, at the start of game, sends Cole packing with tail between legs to the swampy south in order to recuperate and locate a device that'll allow him to amp up his power in order to stop The Beast's path of destruction. It's all great comic book stuff and the story is filled with equally cartoony characters both evil and good, but the real star of show is really Infamous 2's new location, the New Orleans inspired New Morais. Bordered by murky swamps and composed mainly of ramshackle wooden slums, neon lit bars and seedy hotels, New Morais is beautifully rendered with great attention to detail. Some of the best moments come in simply exploring the alleys and roof terraces, sliding down the electric cables and gliding over the city. It's a beautiful and atmospheric place, spoiled only slightly by the frequently bizarre behavior of its population. Civilians often react completely incongruously to the events around them, such as nonchalantly strolling past huge slavering monsters or rushing up to take Cole's photo even as he launches waves of death at them. It's a small point really but it does spoil the sense of immersion that New Morais is clearly capable of.

When not clambering across rooftops, Cole likes to engage in frequent battles with the local militia and monsters from the surrounding swamps. With a good selection of formidable powers with which to do combat, fighting is satisfying, robust and provides plenty of opportunity to be creative. Cole can blast foes from afar, engage close quarters with an electric staff, slam the ground from above, launch foes off tall buildings or just simply pick up cars and throw them. Diving into huge groups of enemies and wreaking terrible explosive havoc to all around creates an awesome sense of being an unstoppable superhero in a way that only flinging cars at helicopters can. That's not to say that combat is easy however, in fact it can often be marred by unpredictable difficulty levels. The now ubiquitous grey screen of death that descends when Cole gets injured gives little indication as to how much punishment he can really take and appears after only a few hits. Sometimes Cole will be felled at the slightest of touches, at other times he can seemingly battle on regardless of damage. This said, when it works well as it more frequently does, the fighting in Infamous 2 is visceral, explosive and a lot of fun.

As Cole scales the city there are numerous side quests that can be taken in order to earn points that can be used to unlock new powers. Some of these can be created by the built in level editor and shared online for other people to play, although at the time of this review there was not enough user content generated to properly review this feature. Time will tell how successfully the powerful level editor included with Infamous 2 will be used by the PlayStation community. Aside from new abilities, missions also allow actions to be performed that are deemed as either 'good' or 'evil'. As in other titles, performing these acts fills up a morality scale which then leads Cole to further embody the traits he exemplifies. For example commit enough good deeds and Cole will win the adoration of his public and unlock 'good' powers such as healing abilities, whereas follow the path of darkness and civilians will run away screaming with fear from Cole and he'll unlock powerful new attacks such as a deadly chain lightning. It's a simplistic morality system that has actually little effect over the story apart from a few instances where choices made affect how a mission plays out, which to be fair, does provide some decent replay value.

Infamous 2 builds on its predecessor in nearly every way. Improved visuals and sound bring the exciting locations to Technicolor life whilst the core mix of combat and exploration have been tweaked to be more responsive and intuitive. Although elements exist in the combat that can occasionally frustrate and experiencing the lush locale of New Morais is cheapened slightly by the bizarre antics of its populace, in the end Infamous 2 is an accomplished and stylish 3rd person action game that is well worth sinking some serious hours into. And, when all is said and done, it is easily the closest to being a superhero that any of us are gonna get.