Read our Review of Van Halen Guitar Hero on Sony PS3 From Activision.

The undeniable success of Beatles Rock Band and Metallica Guitar Hero has shown that rhythm action games that celebrate the works of one band can be fun, entertaining and profitable. I mean, who wouldn't want to breeze through a rendition of 'Here Comes the Sun' with a few friends or to rip it up with a run through of the heavy metal stormer 'Battery' with some boozed up buddies. So when Activision announced they were bringing out a Guitar Hero dedicated to Van Halen, I couldn't help but wonder why?

Do people even listen to Van Halen anymore? Their brand of stadium filling 80s 'cock-rock' seems about as irrelevant to today's musical climate as you can get. Even at their heyday they only had a handful of decent tunes, surely not enough to dedicate an entire game to on the already bloated Guitar Hero franchise. So why does this game exist at all? Can there really be enough die-hard Van Halen fans in the world to financially support this release? Even with the vast amounts of non-Halen filler songs that litter this game (tenuously chosen by the young 17 year old Wolfgang Van Halen and consisting mainly of awful pop-punk and middle of the road American rock) it is hard to imagine anyone caring enough to pay full whack for what, content wise, would have been better suited as a download pack rather than a full release. 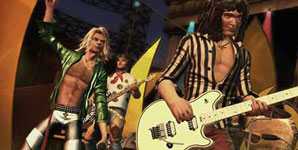 Perhaps instead the game is some kind of vanity project for the band who, not content to slip quietly into dignified obscurity, demanded to see themselves rendered up there on the digital stage along with the Beatles and Metallica. I suppose there is some slight appeal in seeing four spandex-clad hairspray addicts rock out to 'Hot For Teacher', but alas, even this most minor and dubious of pleasures is denied to us as the developers have chosen to recreate the band as they are now; middle-aged, creaky and most importantly devoid of the signature big 80s hair that is synonymous with their music, a completely baffling choice.

Having said all this, it is worth noting that despite the apparently questionable reasons for its existence, Van Halen Guitar Hero remains a fun rhythm action game at its heart. It is no different in its feel from any of its peers and has the same expertly tailored difficulty levels and sense of solo-satisfaction as any of a similar ilk. Some stand out songs (White Wedding, Jump) capture the feel-good factor of Guitar hero at its best but don't really bring anything new to the table. It is a sad thing when the most redeeming feature of a new game is that it hasn't deviated from a tried and tested formula and this unfortunately is Van Halen Guitar Hero's only success, as the lack of any decent Van Halen specific content, (as is so evident in the Beatles and Metallica games) and the high quantity of below average filler songs make this game very poor value for money. A very badly thought out release.