Gran Turismo has long been the racing game of choice of petrol heads and car geeks the world over since its appearance on the PlayStation in the late 90s. Unlike other racing games that may attempt to dazzle with spectacular graphics and slow motion high-speed crashes, the Gran Turismo series is all about the driving experience. As the byword for realistic driving simulation and car modelling, fans of the series will be delighted to find out that despite the long wait, Gran Turismo 5 is no exception. With a clutch of new features and impressive online play it's the best instalment yet, but some niggling interface issues, huge load times and disappointing gameplay glitches mar what could have been the perfect racer. 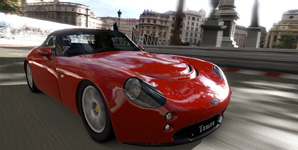 Straight off the bat, Gran Turismo 5 is a very load heavy game. It requires a bulky 8 GB of data to be installed on your PS3's hard drive (which takes an age) in order to prevent the load times between tracks becoming completely crippling. Even with the installation, the delays are unusually long and frequent. Coupled with an ungainly menu interface that can often frustrate and confuse and you've got a very bad first impression. However these annoying elements are only surface issues and if you can look past them they don't detract from the core gameplay that lies at the engine of Gran Turismo 5.

Like others in the series, Gran Turismo 5 contains a bevy of single player game play modes. The main thrust of which is the ubiquitous 'career' GT mode. Here players compete in various cup races and challenges around the world in order to earn credits, which are used to buy cars. Ranking high in races also grants the player experience points which are used to unlock more cups and tournaments. Most of the more challenging races are locked, requiring the player to be a certain level before they can be entered. This tapered approach to the difficulty is a great way of introducing the game's complexity to new players, as it opens up more options as players get more comfortable with GT5. Racing management is also an option in B-spec races, where instead of driving the car yourself you issue instructions to an AI driver, improving his skills and earning credits and XP in the process. Although the appeal of this mode does escape me, why would anyone buy a racing game only to let someone else have all the fun?

Races themselves are pretty much as you'd expect. Trademark realistic handling and precise responsive controls make driving in GT5 an absolute dream. Every subtlety of the track, every bend and dip registers in a realistic way, but this has always been the case in Gran Turismo games. If you spin off a track or slide off a corner it's because of a mistake or misjudgement that you made, and conversely, good driving, such as nailing a tricky corner or recovering well from a skid, is an incredibly rewarding experience. Helpfully, options such as a visible 'perfect racing line' or the new 'skid recovery force' which automatically increases tyre grip should you lose control of the car, are available should anybody find the physics slightly too demanding and are both great features for beginners. The famous Gran Turismo license tests are also still present. Detailing the subtleties of handling and how to perform manoeuvres, these beginner lessons provide well needed instruction to Gran Turismo's quite frankly uncompromisingly realistic handling mechanics as well as being a great taster of the later accessed premium cars.

The cars themselves, numbering over 1000, are divided into standard and premium models. As you'd expect the premium models are a collection of richly detailed, gorgeously powerful, driving machines, each one a goal in itself to collect and drive. Whilst the standard models which make up the vast bulk of the overall roster, contain everything from nippy numbers to slow saloons as well as an impressively redundant selection of Honda hatchbacks. Unfortunately not even nearly the same amount of care and attention to detail has gone into the standard cars, many of them looking very blocky and ugly, compared to the smooth curves of the premium models. The same can be said for the tracks in GT5, many of which seem rather lacklustre and dull in appearance. Comprising over 75 different locales including test tracks, snowy slopes and dusty deserts there is however a great variety of terrains on which to race, and although they are not the best looking they offer a good selection of different racing experiences.

If you can get past the unnecessarily long load times and the fiddly interface then you'll find that under the hood of GT5 is the same great Gran Turismo racing experience as there's always been. The wealth of single player options and challenges offered by the career mode coupled with the more casual arcade and online modes for multiplayer make this the most comprehensive real driving simulator currently available. Although it's not a pedal to the metal, fifth gear boost ahead for the series, it is a welcome update to what still is the real driving fan's vehicle of choice.