Review of Echoshift on the Sony PSP

A sequel to the successful 2008 puzzler Echochrome, Echoshift continues the cool-clean 'portal-esque' aesthetics of the original, combines it with the temporal based trickery of recent indie hit Braid and adds a welcome splash of colour. It's a quirky and intriguing game that will appeal to puzzle fans who don't mind relying a bit more on trial and error than on raw brain power. 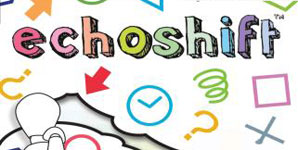 The basic aim of the game is to manoeuvre a little mannequin through various puzzle rooms to an exit door, before the time runs out. Standing in the way of this are all manner of switches, gates, stairs, pitfalls, moving platforms and pointy origami monsters, all of which quickly soak up your precious time so that it becomes impossible for just one of your little fellas to be able to make it to the door before the unforgiving time limit runs out and you are whisked back to the start. This is where Echoshift's new time-based gameplay element comes in, each time you attempt a puzzle and the time runs out, a 'cast' is created that is an exact echo of the actions you performed and the routes you took. So that the next time you attempt to reach the exit door, this 'cast' accompanies you. In this way you can plan in advance and use the echoes of your previous selves to help overcome obstacles, such as hitting switches at one side of the level to allow you to nip through the newly opening door at the other.

Helpfully, new puzzle elements are introduced steadily so that you never feel overwhelmed as you progress through the game. That's not to say that Echoshift isn't difficult, a gentle early learning curve betrays the solid difficulty of the games mid to late levels. Often requiring lots of planning and perfect timing, success requires you to mentally plan the routes of multiple casts through a level as you (hopefully) open doors for them and hit correct switches. When mentally juggling routes of more than one cast this game can become quite a strain on the ole grey matter, meaning it is frequently easier to rely on simple trial and error attempts than it is to sit down and think your way through a problem. This is a shame as muddling through levels often leads to frustration and restarts, not helped incidentally by the rather clunky controls which can occasionally see your dude running up or down stairs at the wrong time, costing valuable seconds and ruining otherwise perfect runs.

However frustrating these incidents are, they are generally few and far between and are more than made up for by the addictive allure of a three star flawless run. If you manage to complete a puzzle using as fewer casts a possible, the game rewards you with a three star rating, if you are less efficient, less starts are awarded. Although it's generally pretty easy to muddle your way through most of the puzzles using 6 or 7 ineffectual casts, the temptation to restart a botched level and do it again using as fewer casts as possible is very alluring. Frequently I found myself restarting puzzles even though I knew I could carry on and complete them, just so I could do them again in a more streamlined fashion. These star ratings are also required to unlock the other puzzles (56 in total). On top of this, completing a puzzle unlocks the ability to replay it in either the more challenging 'key' mode where your last mannequin must pick up a difficult to reach key before exiting the level or 'illusion' mode where you can stop the clock briefly to further improve your speed and efficiency of a puzzle. However although these alternative modes do expand the replayability of the game's levels, they are not sufficiently different enough from the normal puzzle mode to really sustain that much more interest.

But alternative gameplay modes aside, the core game of Echoshift is still an addictive and light puzzler which is perfect for pick up 'n' play, yet still contains enough challenge to keep most puzzle aficionados scratching their heads for at least a good few hours. Plus at its nice low price tag, it would be far too much of a shame to miss out on.