Assassin's Creed was a breath of fresh air when it first came along in 2007. There wasn't many games documenting assassins from centuries ago, and since the first release, the sequels have got better each time. And for the first time, Assassin's Creed: Brotherhood featured online, to rave reviews. The next edition of the Assassin's Creed franchise comes out on Tuesday 15th November and is called Assassin's Creed: Revelations. 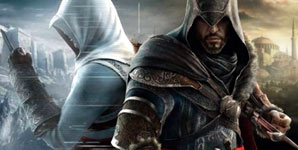 Revelations presents the most enthralling volume of the Assassin's Creed Franchise as of yet and reaches the pinnacle of protagonist Ezio's adventure, following in the footsteps of his heroic mentor, Altaïr, on a journey through both exploration and fate, leading him to Constantinople, the heart of the Ottoman Empire.

The critically acclaimed on-line game play has also had a makeover, with more playable characters and more game modes, such as the capture the artefact, a 16th century take on capture the flag.

Speaking with Gamespot, Revelations' online developer Adreane Meunier has said there will be character customisation available in it masses, with such things as emblems and a choice of combat animations for your character. Meunier also spoke of new sociable factors brought into the game, where you are able to customise your gamer card for others to see and set challenges to friends to try beating your online score.

There have also been some new combat techniques added to the game, with a smoke bomb now available which sets you up for an infrared style attack. As well, there is a new 'hookblade' available which makes it possible to zip-line from building to building and use as part of an attack to drag or pull enemies from where they are positioned.

Along with the new kit, there is the typical attention to detail that has come to be the norm in the Assassin's Creed games.

If you've been left with some questions you want answering, it looks like you're going to have to play Revelations, too. Lead game designer Alexandre Breault told NowGamer.com: "One thing is for sure: players will be given a lot of answers in Revelations." On the main character he said, "A good chunk of them will be about Ezio because we'll know exactly what happens to him in the end. And we know that a lot of players want to know what happened to Altai¨r after they finished playing him; there's a lot of mystery around him."